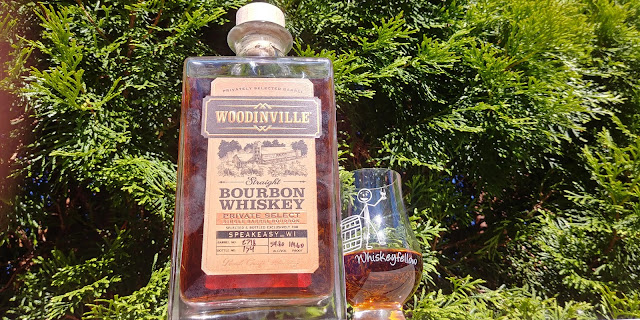 Have you heard of Woodinville Whiskey? If not, perhaps it is time to take a look at them.  I discovered Woodinville about a year or so ago. Woodinville Whiskey Distilling Co. is located in Woodinville, Washington. They do their own distilling and don't source. Their barrels are created from wood seasoned in the open air for 18 months. Once coopered, the barrels are then slowly, heavily-toasted, and then subject to a heavy charring. As far as whiskey goes, they offer both Rye and Bourbon.
Their Bourbon is made from a mash of 72% corn, 22% rye, and 6% malted barley. After the barrels are filled, they are then transferred to one-story rickhouses (similar to Four Roses) on the other side of the Cascade Mountains in Central Washington where they are left to age.  The rickhouses are not subject to any artificial temperature controls.
Today I'm providing my tasting notes on the very first Woodinville Bourbon store pick in Wisconsin. I know all about this Bourbon because I was on the selection committee along with The Speakeasy_WI group and Neil's Liquors of Middleton. We wound up choosing Barrel 2718, which is five years old and we took it at barrel strength at 119.42°. It is non-chill-filtered and the yield was 192 bottles.  Retail is $69.99.  We named it Whassup? Flockers.
So, what makes this Bourbon special?  Time to #DrinkCurious and find out!
Appearance:  In my Glencairn glass, Whassup? Flockers appeared as a reddish amber. The color was definitely deep.  It left a micro-thin rim on the wall and extremely slow legs to drop back to the pool.
Nose:  As I waited for the whiskey to breathe, aromas of cherries filled the air.  When I brought the glass to my face, that cherry became even stronger. That was joined by cinnamon and caramel. As I continued to explore, I discovered banana.  When I inhaled through my lips, I found heavy vanilla that rolled across my tongue.
Palate:  The mouthfeel was very silky and it took no effort for it to coat every corner of my mouth. It also, despite being 119.42°, failed to offer any noticeable heat. That allowed me to easily identify oak, barrel char, rye, and light mint at the front. Come mid-palate, I tasted thick caramel, berry, and crème brûlée that packed a punch. On the back, it was smoked oak, rye, and cocoa.
Finish:  Whassup? Flockers gave me a very long, complex finish of dry oak, white pepper, and coffee. Just as with the mouthfeel, there was warming but nothing that could be described as "burn."
Bottle, Bar, or Bust:  If you've never had a whiskey that I've picked, I'm very choosey. I reject more barrels than I accept and I'm perfectly happy walking away empty-handed. My reputation as both a picker and a reviewer is on the line and I want nothing that isn't amazing attached to that. So, cut to the chase, this one's a Bottle. However, at the time of publishing, there are only a few dozen bottles left, so if you're going to act on it, the time to do that is now.  Cheers!

My Simple, Easy to Understand Rating System:
Posted by Whiskeyfellow at 5:21 PM