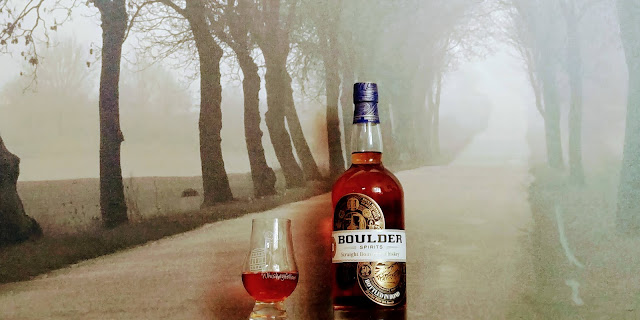 Some whiskey drinkers will poo-poo a certain region. Maybe they had a mediocre bottle from Texas. Maybe a sourced bottle from a Florida non-distilling producer (NDP) rushed something to market. One of those regions that, in my opinion, get an unfairly bad reputation is Colorado.
I've tasted some amazing Colorado whiskeys and I've had some very mediocre ones. Like anything else, it becomes a bit of a crapshoot. You never know what you're going to wind up with. But no region is free of that risk.  There are some very boring Kentucky whiskeys. There are some very exciting Wisconsin whiskeys.  I even reviewed something rather amazing out of Nevada. What states a whiskey comes from is more of a technical detail rather than something I paint with a broad brush.
Today I'm reviewing a Bottled-in-Bond Bourbon from Boulder Spirits. Bottled-in-Bond is an attention-getter with me, as that's my favorite category of American whiskey. Colorado has a soft spot in my heart because I lived there for 20+ years. But, a whiskey has to earn its place into my Bottle, Bar, or Bust rating system and there are no free passes.
Boulder Spirits is also known as Vapor Distillery. It is located in (you guessed it) Boulder. Their master distiller, Alastair Brogan, does not refer to himself as such, rather, he calls himself a Chieftain. Alastair is from Scotland, and he came to the United States with his Scottish style of distilling.  He uses a copper pot still from Scotland to distill his whiskey.
In the case of this Bourbon, the mash consists of 51% corn, 44% barley, and 5% rye.  That's an amazing amount of barley!  Fermentation takes at least 36 hours, then the mash is run through the still twice. It is then placed in 53-gallon #3-char white oak barrels where it rests at least four years in a warehouse that is not temperature controlled. It was then proofed down to 100° (because that's all part of Bottled-in-Bond) using El Dorado Springs water.  Retail is $55.00.
Enough of the backstory, let's get on with the tasting, shall we?  First, I'd like to thank Boulder Spirits for providing me a sample of their Bottled-in-Bond Bourbon in exchange for a no-strings-attached, honest review. Time to #DrinkCurious.
Appearance:  In my Glencairn glass, this Bourbon appears as a deep orange amber. It left a thin rim on the wall but generated fat, wavy, heavy legs to drop back to the pool of liquid sunshine. After the legs fell, small droplets stuck by the rim.
Nose:  It started off as corn, which was a bit surprising considering how low the corn content was. But, oak and a very definitive Granny Smith apple joined in, and that gave way to tropical fruit. Just when I thought I nailed it down, I found bubblegum. When I inhaled through my lips, thick, rich caramel danced across my tongue.
Palate:  I found the mouthfeel to be light and airy. For 100° that was a bit unexpected. I also found a mild sizzle that wasn't quite heated but let you know it was there. At the front were toasted oak and roasted almond. That almond came through strong. As it moved to mid-palate, I tasted salted caramel and malted milk balls. Then, on the back, an interesting combination of green apple, smoked oak, and light spice probably attributed to the rye.
Finish:  A medium-length finish featured smoked oak, light char, and creamy vanilla. I was frankly shocked that the vanilla never appeared on the palate itself because that's a quality most every Bourbon has.
Bottle, Bar, or Bust:   There are a few things I want to discuss. First and foremost, this is dangerously easy to sip. I didn't taste the alcohol but it certainly made itself a known factor with how fast I drank it. Secondly, I was in love with the mid-palate more than anything else. I felt like a kid in a candy store.  Finally, I've had Bottled-in-Bond malt-heavy Bourbons before, they're always a bit weird, and this one was no different. But, I need to stress this one was weird in a good way.  If you like Colorado whiskeys, you're going to enjoy this Bottled-in-Bond Bourbon. If you're not a fan of Colorado whiskeys, I'm willing to bet this one will change your mind. This is $55.00 and I'm giving it a Bottle rating. Cheers!
My Simple, Easy-to-Understand Rating System
Posted by Whiskeyfellow at 12:47 PM