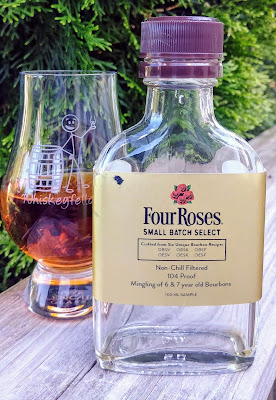 Four Roses has long had three expressions in its standard releases:  Yellow, Small Batch, and Single Barrel. Then Master Distiller Brent Elliott comes along, and he introduces a new, permanent fourth rose to the stable:  Small Batch Select.  It is the first addition to the brand in a dozen years.
Four Roses Small Batch has been a staple for nearly any bar. It is affordable, it is tasty, and it gives an idea as to the quality Four Roses has to offer. So, when Small Batch Select was introduced, it was a bit confusing. What would make it different from the original? More importantly, why offer it?
Four Roses Small Batch is a blend of four of the ten recipes:  OBSO, OESO, OBSK, and OESK. It is also bottled at 90°.  If you're wondering what any of that means, allow me to provide some background of Four Roses recipes.
Each recipe has a four-digit code.  Two of the four digits are always O _ S  _. The blanks are what matter.  There are a 35% high-rye mash labeled B and a 20% low-rye mash labeled E. Then, the last digit tells you about the yeast:

As such, if you take the five yeast strains and two mashes, you get a total of ten combinations. Make sense?
The Small Batch Select is a different animal. Instead of four recipes, this one uses six:  OBSV, OESV, OBSK, OESK, OBSF, and OESF.  It is also bottled at 104°.  Moreover, this one is non-chill filtered. It also ages for between six and seven years.  Retail is about $54.99 and this is newly released to Wisconsin.
Before I get started on my review, I'd like to thank Four Roses for sending me a sample in exchange for a no-strings-attached, honest review. Let's do that #DrinkCurious thing, shall we?
Appearance:  In my Glencairn glass, Small Batch Select presented as bronze in color.  It left a very thin rim on the wall, but fat, heavy legs.  After those legs dropped, it offered a second set of smaller, slower legs.
Nose:  Before things got started, I picked up floral notes.  Once I brought the glass to my face, I found vanilla and cinnamon.  I continued to explore and discovered oak and caramel, then orange zest, plum, and cherry.  When I inhaled through my lips, thick, rich caramel ran across my tongue.
Palate:  The mouthfeel on the Small Batch Select was strangely thin but creamy.  At 104°, you'd think there would be some burn, but in this case, there really wasn't. At the front, I tasted toasted oak, caramel, and vanilla.  As it moved to mid-palate, peach, apple, and a hint of leather took over.  Then, on the back, the fruit changed to heavy cherry pie filling, dry oak, and rye spice.
Finish:  A medium-to-long finish of cherry, dry oak, mint, and very dark chocolate stuck around.  The mint was slight. The cherry was not. This wasn't that fake cherry cough syrup stuff, rather, it was definitely fruity.
Bottle, Bar, or Bust:  Here is where the pedal hits the metal - this is the most expensive standard release from the distillery, and as such, I expect a lot from it. It is also the highest proof, with the Single Barrel weighing in at 100°. I believe Elliott did a good job choosing the proof. For example, when I added a single drop of distilled water, it lost a portion of flavor and richness and became disappointing and dull (I had perhaps a quarter-ounce when I added the drop). The price is less than obnoxious and not only do I see this as a good value, but I enjoyed it immensely. As such, this is something I'd gleefully add to my whiskey library and crown it with a Bottle rating.  Cheers!

My Simple, Easy-to-Understand Rating System
Posted by Whiskeyfellow at 7:29 AM