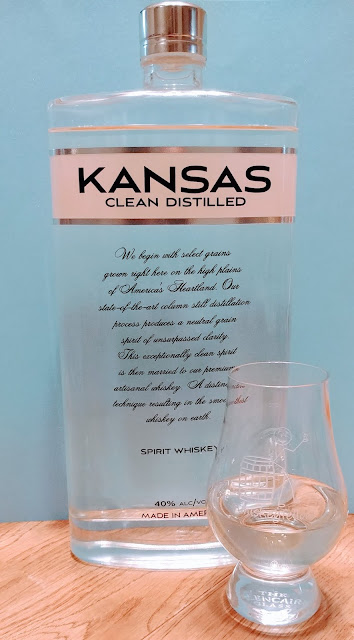 Every so often, I come across something new and different. Sure, every whiskey is different per se, but I mean really, really different. Today, I'm reviewing Kansas Clean Distilled Spirit Whiskey.

What, exactly, is Spirit Whiskey? I had to look up the definition. According to US law:

You can look at that and come to a variety of conclusions, including but not limited to vodka with a splash of 5% or more whiskey, and, in theory, you'd be right. Kansas Clean is a bit more complicated than that. The first step is a mash of wheat, corn, malted barley, and rye.  That's then sent through the column still to create a five-times distilled neutral grain spirit (NGS).  That NGS is then blended with an "aged" Bourbon. That marriage is then double-distilled again.
The concoction is then proofed down to 80°, and retail is about $44.99. Before I get to the tasting notes, I'd like to thank Fabulous American Beverages for providing me with a sample in exchange for a no-stings-attached, honest review.  Let's #DrinkCurious, shall we?
Appearance:  In my Glencairn glass, Kansas Clean Distilled appeared, well, clean. It had a slight yellowish hue, just like a newmake, white dog, etc. It left a thin rim that generated medium, wavy legs to drop back to the pool of... um... liquid sunshine, I suppose.
Nose:  My first sniff gave me nothing. It might as well have been a glass of water. I was wondering if maybe that's what I got. But, as I continued to smell the glass, I found buttered popcorn, similar in nature to most newmake you'd stumble across. Except, the popcorn was lighter, more along the lines of vodka.  When I inhaled through my mouth, I picked up vanilla bean.
Palate:  The mouthfeel was akin to water. It offered a brief, feathery burn. The flavor of vanilla filled my mouth... And, at this point, I stopped my analysis. I went to the liquor cabinet and grabbed a bottle of Absolut Vanilla. I had to do a side-by-side comparison because I could swear that's what I was sipping.
Except, it wasn't. The vanilla in the Kansas Clean Distilled wasn't artificial like the Absolut. There was no ethanol burn. As I went back to the Kansas Clean Distilled, I found myself tasting sugar cookies and toasted coconut.
Finish:  There was a heaping helping of vanilla cream and something peppery. It closely resembled green peppercorn.  Medium in length, the entire thing seemed strangely balanced.
Bottle, Bar, or Bust:   Judging Kansas Clean Distilled may have been one of the most challenging reviews I've put together. It is in a realm by itself. It isn't moonshine. It isn't vodka. It is somewhere in-between the two in a roundabout sort of way. I can see where this has its place, possibly for fans of flavored vodkas or those who concentrate on cocktails. The packaging is absolutely gorgeous, the bottle looks like a giant, glass hip flask. Despite that, for $45.00, that's asking a lot for something in that universe. I don't envision die-hard whiskey drinkers going for this, and for that reason, it takes a Bust for me.  If you're into flavored vodkas or want an interesting, different mixer, this could be attractive, and for those, I'll toss a Bar recommendation at it. Cheers! 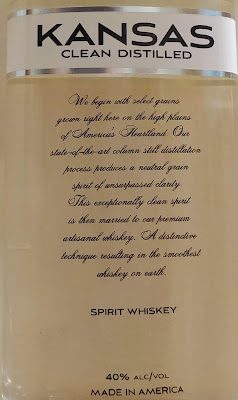 My Simple, Easy-to-Understand Rating System
Posted by Whiskeyfellow at 6:53 AM