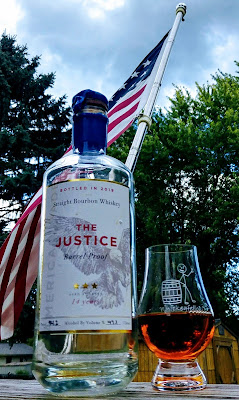 I'm gonna lay all my cards on the table.  I am, generally speaking, suspect of George Dickel whiskeys. It isn't that they're bad, but what I've had has been fairly unimpressive. I've walked away from several barrel picks, not knowing they were Dickel beforehand, but after passing judgment, learned they were, indeed, Dickel barrels. For me, there's always that Flinstones vitamin taste to it.
The #DrinkCurious lifestyle is one of each barrel or bottle considered innocent until proven guilty. That means when you are presented with something you've rejected in the past, you don't dismiss future opportunities. You take them one at a time. Everything deserves a second, third, or even fourth chance.
Proof and Wood Ventures is a company that brands itself as Purveyors and Blenders of American and Global Spirits. Founded by Dave Schmier, it takes what it considers only the best barrels and tries to improve upon them. That's a heck of a task that many have tried and few have found serious success.
Today I'm reviewing The Justice, which is a Dickel-sourced Bourbon that carries a 14-year age statement. Proof and Wood purchased a dozen barrels and blended them to make this barrel-proof Bourbon. And, when I say barrel proof, you're going to think I'm crazy when I tell you what it is:  94.2°!  That's one of the lowest barrel-proof American whiskeys I've had the opportunity to try, and, in fact, might be the lowest. It was distilled in 2005 and bottled in 2019. Retail is about $89.00.
I'd like to thank Proof and Wood for providing me a sample of The Justice in exchange for a no-strings-attached, honest review. Let's have a trial, shall we?
Appearance:  In my Glencairn glass, The Justice appeared before The Court as a deep, brown amber. It left evidence of a thick, heavy rim and fat, slow legs that dropped back to the pool of liquid sunshine.
Nose:  Aromas of cinnamon and vanilla pled the case. Then, cherry, plum, and toasted oak were introduced for consideration. When I inhaled through my lips, the vanilla was insistent.
Palate:  The oral arguments started thick and full-bodied.  Plum, cinnamon, and cherry testified first. Then, midway through, cola, stewed fruits, and citrus bore witness. Finally, dry oak and cocoa established their presence.
Finish:  A long, intense cross-examination of dry oak, spearmint, black pepper, and leather made their cases. Then, cherry offered an objection insisting it was owed due diligence.
Bottle, Bar, or Bust:  I found a few things that impressed me. First, the mouthfeel got thicker and thicker each time I sipped. Second of all, this one drank much higher than 94° - it wasn't burn per se, but there was a definite Kentucky... err... Tennessee hug. The verdict is in:  This one changed my mind on Dickel. I thought this was deliciously complex, it was unusual, and I think this is worth every penny of the $89.00 investment. As such, it takes my Bottle rating. Cheers!
My Simple, Easy-to-Understand Rating System
Posted by Whiskeyfellow at 6:22 AM