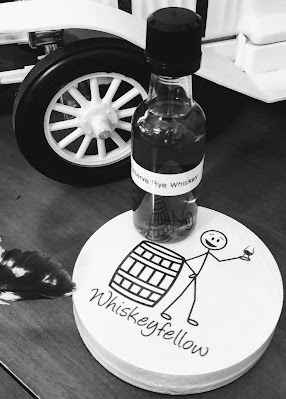 If you're new or relatively new to American Rye, you might be trying to get past the spiciness this category of whiskey has to offer. Similarly to getting used to peat in Scotch, rye's spiciness is something most people have to acclimate to fully appreciate.  Thankfully, many distilleries offer barely legal Ryes, meaning, they have the minimum or close to the minimum 51% requirement of rye content in the mash.
Many of the legacy distillers hover in this area because the idea is to have a product enjoy mass appeal. Woodford Reserve is no different. They're not targeting drinkers who want 95% or 100% rye content because most casual whiskey drinkers wouldn't become repeat consumers.

"Woodford Reserve Rye uses a pre-prohibition style ratio of 53% rye in its mash bill to pay homage to history’s original rye whiskeys, making spice and tobacco the dominant note among a sea of fruit, floral, and sweet aromatics, which yields a nice sweetness and overall balance. Our rye whiskey can deliver complex flavors – neat, on ice, or in a cocktail. A balanced rye makes a more balanced cocktail." - Woodford Reserve

Woodford Reserve's Straight Rye has a mash of 53% rye as stated above, however, the remainder is also important.  33% of that is corn, meant to sweeten the pot, and the last 14% is malted barley, meant to round things out and, of course, to aid in the fermentation process. It carries no age statement, but because of that, we know that it is at least four years old. Woodford Reserve uses new, #4-charred oak barrels for a majority of its products. Woodford does utilize climate-controlled warehouses where it tries to make the most out of cold winters and hot, humid summers. And, because it is straight, we know there is nothing added but water to proof it down to 90.4°.  Retail is about $34.99.
How does its Straight Rye taste?  It is time to #DrinkCurious, but first, I want to thank Brown-Forman, the owner of Woodford Reserve, for providing me a sample in exchange for a no-strings-attached, honest review.
Appearance:  In my Glencairn glass, this whiskey presents as a deep chestnut color. It left a medium-thick rim and generated watery legs that quickly dropped back to the pool of liquid sunshine.
Nose:  Despite being only 53% rye, rye spice was the first thing that hit my nostrils. It was joined by toasted oak, which was unexpected considering the heavy char level. As I continued to explore, I unearthed apple, honey, candied red fruits, and pecan.  When I inhaled through my lips, the pecan continued and was married to tobacco leaf.
Palate:  Things started off with a thin and airy mouthfeel. Generally speaking, American Rye starts off spicy. Well, this one didn't - it started off with sweet honey. The honey was then mingled with black peppercorn and rye spice. Come mid-palate, brown sugar and heavy mint dominated. Then, on the back, vanilla bean and pear completed the trip.  It was strange to have the flavors go sweet to spicy, sweet to spicy.
Finish:  While there wasn't a whole lot going on, that was offset by how long it lasted. Sweet vanilla, almond, and dry oak continued the uniqueness of the sweet to spicy cycle.
Bottle, Bar, or Bust:  Woodford Reserve Straight Rye is a simple but interesting pour. There is nothing overly complicated about it, but weirdly unpretentious as it was, there was also nothing lacking. This is an easy sipper, it is very affordable, and not even challenging to obtain.  All of that is the recipe for a Bottle rating, and I believe this is one you'll enjoy.  Cheers!
My Simple, Easy-to-Understand Rating System
Posted by Whiskeyfellow at 6:43 AM