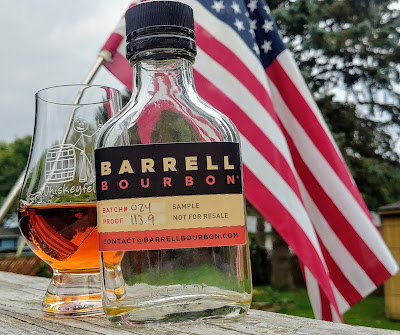 Barrel-proof whiskey is a ton of fun. First of all, it is exciting to taste something in its purest form, before it has been adulterated.  Secondly, it gives you a chance to play around by carefully adding water or ice, bringing out different notes, yet still have enough proof to enjoy what's there.

Then there's the art of blending. Some folks get hung up on single barrels, single malts, etc. I make it a point at any of my tasting events for my guests to keep an open mind - single barrels and single malts can be awesome, but blending is a learned skill and unless you're very, very lucky, you don't just mix things together and wind up with a good finished product. Play around with an infinity bottle - you'll understand that many great whiskeys blended together do not necessarily make for a good blend.

Today I'm reviewing Barrell Bourbon, Batch 024 from Barrell Craft Spirits. Barrell isn't distilling - rather, they're blenders. They take great care in selecting the barrels they believe will create something special. They also don't source from a single distillery. In the case of Batch 024, it sourced from Indiana (MGP), Tennessee (Dickel), and Kentucky (yeah, I have no idea). Barrell found high-rye Bourbon barrels between nine and fifteen years old.  The nine, ten, and thirteen-year barrels were chosen for their spicy qualities. Then, a fifteen-year was chosen for its citrusy notes. By the time the blending process is done, barrel-proof is 113.9°.  A 750ml will set you back about $89.99.

That's in the category of what I consider pricy, and as such, it needs to be special to get a Bottle rating from me. I'd like to thank Barrell Craft Spirits for providing me a sample of Batch 024 in exchange for a no-strings-attached, honest review. And now, it is time to #DrinkCurious.

Appearance:  In my Glencairn glass, Batch 024 presented as mahogany in color. It created a very thick rim and fat droplets that stuck like glue. They continued to form until they became too heavy, then started to crawl back to the pool of liquid sunshine.

Nose:  A floral perfume hit my olfactory senses. Once I got past that, I discovered oak, and then it became an orchard. I found orange peel, apples, pear, and a huge slap of cherry. Before the nose ended, cinnamon and nutmeg added a bit of spice. When I inhaled through my lips, it became a vanilla bomb.

Palate:  This was a thin, oily Bourbon, and that shocked me because of how it stuck to the glass. Things started off with an earthy quality, followed by oak and cocoa powder on the front. As the liquid moved to mid-palate, I tasted dark chocolate, gingerbread cookies, and cinnamon. On the back, there was a harmony of leather, tobacco leaf, clove, and cherry.

Finish:  I found a very, very long finish of black pepper, clove, and a hint of saline. While I didn't experience a blast of "heat" from the proof, my hard palate was noticeably numb.

My desire to see what would happen if I added distilled water became overwhelming. Using an eye-dropper, I added only two drops. That should be enough to bring out new sensations without overdiluting things.

Nose:  At barrel-proof, there was a lot of fruit. With the added water, it just exploded with plum and cherry. Then notes of cinnamon and brown sugar, and, finally, banana cream pie with Nilla cookies. It was crazy, I could smell that whole desert!  When I inhaled through my lips, it was all milk chocolate.

Palate:  It is amazing what water can do to change a mouthfeel. That thin, oily attribute was gone and it transformed into a thick, creamy one. Cinnamon, gingerbread, and vanilla were at the front. Brown sugar, caramel, and mace then took center stage. On the back, dry oak, cola, and cherry rounded things out.

Finish:  Black pepper, and clove remained, but those were accompanied by dry oak and banana pudding, offering an unusual experience.

Bottle, Bar, or Bust:  I appreciated what Batch 024 had to offer when sipped neat. I was ready to give it a Bottle rating. When I added water, I not-so-silently prayed I wouldn't dilute it too much. Despite enjoying it neat, those two drops of water made things fascinating. In either case, the Flintstones vitamin sensation that is typical of Dickel was completely absent, and that was a bonus. Barrell did a stellar job blending barrels from the three distilleries and created something well worth $90.00. It snags my Bottle rating, and I invite you to play around with distilled water if you buy one. Cheers!

Posted by Whiskeyfellow at 6:54 AM