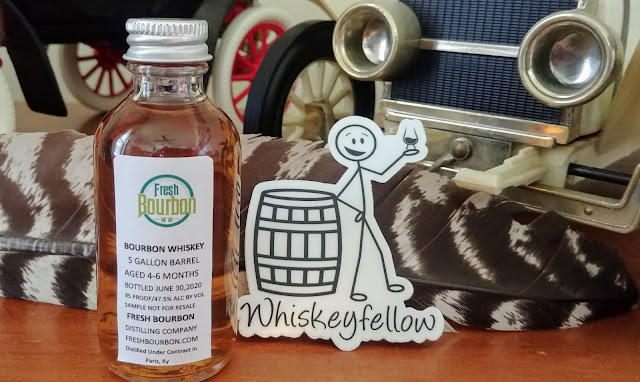 Classic and aged is something many folks look for in whiskey. Fresh and new is something many reviewers get excited over. It isn't that we don't love the tried-and-true stuff (because we absolutely do), rather, we're also looking for something cutting edge and not quite on everyone's radar. As such, when a sample of Fresh Bourbon arrived at my doorstep, I was both curious and excited.
What, exactly, is Fresh Bourbon?  It started in 2017 by founders Sean and Tia Edwards. Their goal was to create unique whiskeys and other distilled spirits, as well as opening their own distillery, Fresh Bourbon Distilling Company. As we all know, building a distillery takes time, and while the campus is currently under construction, they're contract distilling with Hartfield & Co. Distillery in Paris, Kentucky.
What makes their idea fresh? According to the Kentucky Senate, the Edwards have been recognized as the owners of the first African-American owned distillery in the state. That's not just fresh, that's huge.
The Edwards didn't want to go the route of what many craft distillers do: they were not going to source their whiskey. They use their own proprietary mash of 60% corn, 20% honey malt, 10% malted wheat, and 10% malted rye. It was run through a 500-gallon pot still. To bring things to market sooner, they're using small barrels - six gallons or less. This first batch aged in a 5-gallon new, charred-oak barrel for four months.
Before you freak out, a five-gallon barrel is really small. Anything inside that will age quickly, probably a lot faster than you'd ever imagined.
Fresh Bourbon is packaged at 95° in 750ml bottles that will set you back $42.00.  However, currently, you have to pre-order it from their website as those bottles won't be available until late 2020 or early 2021. Pre-ordering will continue until the end of September. This leads to a question: Should you buy now and taste later? It is time to #DrinkCurious, and I'd like to thank the Edwards for sending me a sample in exchange for a no-strings-attached, honest review.
Appearance:  In my Glencairn glass, Fresh Bourbon presented as a medium-orange amber. Frankly, it could pass for a variety of Bourbons you'd see on any store shelf. I couldn't get it to generate a rim on the wall. Each time I attempted, the Bourbon would immediately fall down with speedy, thicker legs. This is a glass that I've used plenty of times for reviews and I know it does not have a hydrophobic coating.
Nose:  Things continued to be unusual with the aroma:  it was a blast of smoked honey. Corn and floral notes joined the club. I also found sawdust. But, the honey carried over those notes. When I inhaled the vapor through my lips, it was sweet corn.
Palate: A light-bodied texture opened to flavors of honeysuckle and corn. Mid-palate provided almond and the back charred oak.
Finish:  Medium-to-long with honeysuckle, char, milk chocolate, and black pepper. When I assumed the finish ended, it felt like a drop of honey was crawling down my throat.
Bottle, Bar, or Bust:  Fresh Bourbon was very sweet.  If you told me this was honey-infused, it wouldn't surprise me in the least. If you told me this was a beer that was run through the still, that wouldn't shock me, either. But, that's the honey malt in action. In fact, Gambrinus Malting Corp., the manufacturer of it, recommends brewers use at least 20% to impart the honey flavor profile, and the Edwards followed that recommendation in their mash.
I felt like I was drinking a sweeter beer. I'm not a beer drinker. But, I'm also cognizant of the fact many whiskey drinkers also enjoy beer. If that's your jam, then I'm going to suggest giving Fresh Bourbon a try. You may really like it, it just isn't for me. Because of that, I'm offering my Bar rating. On a final note, applaud the Edwards for trying something very unique - that takes a lot of guts. Cheers!
My Simple, Easy-to-Understand Rating System
Posted by Whiskeyfellow at 6:44 AM