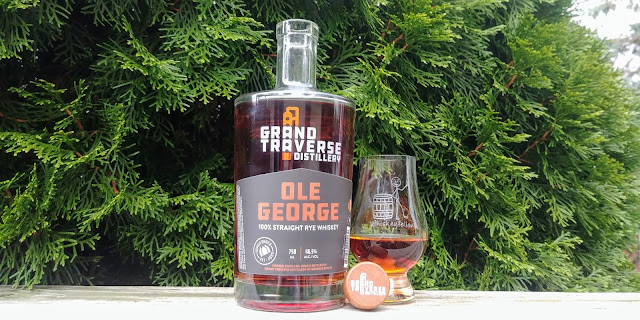 I'm not all that into backstories. Truth be told, I don't take them at face value. Everyone has a grandpappy's grandpappy who was a moonshiner or distiller, had a secret family recipe that was lost for however many years, and then it was magically found behind an old cabinet that had been passed down from family member to family member, waiting to be resurrected. Or something like that.

So, when I read the story on the back of Ole George and saw the words "Grandpa George" jump out at me, I had to roll my eyes a bit. I discovered the backstory doesn't go back too many generations. There is no talk of secret recipes. Here's what it says:

I grew up on a family farm in Michigan. One day, in the hayloft, I discovered three well-used whiskey jugs. Grandpa George, a Polish immigrant, was putting grain to good use. Fast forward to 2005. We opened Grand Traverse Distillery, Northern Michigan's first craft distillery. We use only local grains. We distill and bottle every spirit we sell. No. shortcuts. Grandpa George would be proud.

Those words are from Kent Rabish, grandson of George, founder of Grand Traverse Distillery. Ole George is their 100% Straight Rye Whiskey, and that's what I'm reviewing today.

Kent's son, Landis, is the Master Distiller. It is a grain-to-glass operation. The mash starts with, as the label suggests, 100% rye.  95% of it is unmalted, the remainder malted. It is triple-distilled in a copper pot still and then placed in new, charred oak to age. And, while the bottle carries no age statement, we know that means it is at least four years. Interestingly enough, it is bottled at 93° but does not get proofed down. That's right, despite that low number, this is barrel-proof whiskey. It is also non-chill filtered, so you're getting every bit of flavor the whiskey has to offer. A 750ml bottle will set you back about $54.00.

I'd like to thank Grand Traverse Distillery for sending me a sample of Ole George in exchange for a no-strings-attached, honest review. Time to #DrinkCurious.

Appearance:  In my Glencairn glass, Ole George presented as a deep, copper color and was clear, despite being non-chill fitered. It created a thin rim that offered thick, heavy legs to drop back to the pool of liquid sunshine.

Nose:  Things started off with floral rye, and was joined with cinnamon and oak. Caramel took over, and after some serious exploring, I found sweet fruity notes. When I inhaled through my lips, I tasted black pepper and vanilla - an interesting combination indeed.

Palate:  This whiskey had a very airy mouthfeel. I don't say that lightly. This was a step above drinking vapor!  Flavors of cocoa, nutmeg, and allspice were the first flavors to hit me. As it moved mid-palate, orange zest, oak, and dense rye bread took over. Then, on the back, a marriage of black pepper and barrel char.

Finish:   The barrel char stuck around in the finish. Clove, smoked oak, and tobacco added to a long-lasting, spicy, smoky completion.

Bottle, Bar, or Bust:  How on earth you create barrel-proof whiskey offering an almost lighter-than-air mouthfeel eludes me. The smoke quality on the finish should not be confused with peat, it comes from the char. This is wonderfully balanced and interesting. Take into account the mid-tier price for craft whiskey, and Ole George snags my Bottle rating - you'll love this. Cheers!

Posted by Whiskeyfellow at 6:45 AM