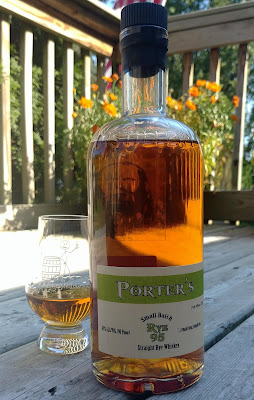 Utah is not a place you immediately associate with whiskey. I mean, this is the Mormon capital of the world. Mormons are not known for imbibing in alcohol. In fact, practicing Mormons abstain from it. Its Words of Wisdom mentions "strong drink" and that's been defined by the Mormon Church as alcohol of any kind, including wine, beer, and yes, whiskey.

Except then, of course, what brand comes to mind after a few moments of thought?  High West Distillery!  High West is very well-known and I'm not sure how that escaped me when I started thinking about this review.

I stumbled upon Ogden's Own Distillery, a micro-distillery that creates a variety of flavored spirits. Founded in 2009, it is located in Ogden.  Its first unflavored whiskey is called Porter's Small Batch Rye 95. Porter is named for Orrin Porter Rockwell, who was known as a determined lawman and a bodyguard to Joseph Smith, Jr., and was an important figure in the founding of the Church of Latter-Day Saints. It made me curious as to why a Mormon would be the namesake of a whiskey.

Porter's Small Batch Rye 95 led me to think the "95" referred to the proof. Nope, instead, it describes the rye content. The label, which, incidentally, is made of and printed on actual wood (versus paper), states it is distilled in Indiana, aged, blended and bottled by Ogden's Own Distillery. It should come as no shock that when you see the words, "Distilled in Indiana" that this mostly means MGP.  When you take into account the mashbill is 95% rye and 5% malted barley, that removes all doubt - that's a standard MGP recipe.

What makes this Rye different from other MGP-sourced whiskeys is the latter part of the label's disclosure. It spent the first quarter of its life aging in Indiana. From there, it was shipped to Utah, where it was aged an additional three years in heavily-charred oak barrels. Utah is a dry climate and the winters tend to be harsher than the humid climate of Indiana. Assuming the warehouse isn't temperature-controlled, that should lead to a significant difference in how the whiskey interacts with the barrel.

It is then proofed down using spring water that requires a 5-mile hike to obtain. Apparently, this spring is inaccessible to vehicles. I don't quite understand the semantics as I'd assume you'd need a lot of water in the proofing process, especially considering this water is used in Ogden's Own other products as well. The proof is brought down from 111° to 90°.  A 750ml bottle runs about $20.00.

One last thing before I get to the review.  On the front and back labels, there is almost a ghost-printing of Five Wives 7/20.  Five Wives is the name of the vodka that Ogden's Own produces, and the water source is the same. Also, a clear sticker with Porter's face is on the back of the bottle. 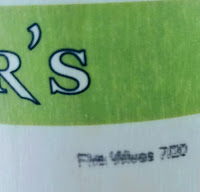 That's a long introduction, and now let's get to why you're here - the tasting notes and my review. I'd like to thank Ogden's Own for sending me a sample in exchange for a no-strings-attached, honest review. Time to #DrinkCurious.
Appearance:  In my Glencairn glass, Porter's presents as the color of honey.  It created a thinner rim but fat, watery legs to drop back to the pool of liquid sunshine.
Nose:  Initially there was dill, honey, and toasted oak. The honey was unexpected especially considering the mashbill. Underneath those were grapes and baking spices.  When I inhaled through my mouth, berries coated my tongue.
Palate:  My first sip was thin and oily with a light body. Subsequent tastes failed to add any weight.  Cinnamon, lemon zest and cocoa started things off. As this rye dropped mid-palate, the citrus changed to orange with an added note of chocolate. Then, on the back, was a combination of toasted oak and toasted cereal grains.
Finish:  A medium-to-long finish of oak and white peppercorn stuck to my tongue and throat. It was spicy, but there was no "burn" per se.
Bottle, Bar, or Bust:  I found Porter's to be different than other MGP-sourced Ryes I've had, particularly in this younger realm. That may have been due to the change in venue for aging or perhaps the spring water used, or even a combination of the two. What was confusing was the notation by Ogden's Own of using a heavily-charred barrel and the simple, toasted profile. Of course, heavily-charred is similar to small batch, which is there's no legal definition of either. My point is I was expecting from that a smoky component that never materialized.
This isn't a mind-blowing whiskey by any means. For a Rye, especially a young one, it is very subdued. It is an easy sipper neat and would be fine in a cocktail where spiciness isn't required. This is a $20.00 bottle. For me, that's an opportunity to #RespectTheBottomShelf, and in this case, I do. And, because of that, this one earns a Bottle rating. Cheers!
My Simple, Easy-to-Understand Rating System

Posted by Whiskeyfellow at 6:31 AM