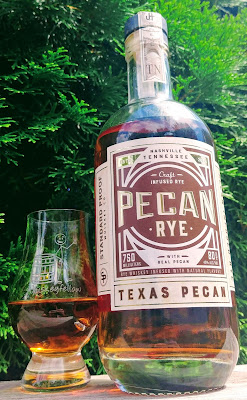 I've reviewed flavored whiskeys before. They're a different kind of spirit to review because not only am I trying to review the flavor, but also the whiskey hiding underneath the flavor.  Is the producer trying to show off a skill, or, conversely, trying to salvage a mediocre (or even horrible) whiskey?

If you were to ask me about the veracity of the backstory, I have no idea. However, I will say that's to the one that Skrewball Peanut Butter Whiskey uses. As far as I can tell, the two brands are unrelated.

Standard Proof Whiskey Co. has been advertising on social media like crazy.  Naturally, when I stumble across something I've never heard of, I want to know more. Established in 2017, this non-distilling producer (NDP) offers infused Rye whiskeys. As far as finding out who the actual distiller is, that becomes challenging. The whiskey comes from a mash of 51% rye, 44% corn, and 5% malted barley. I've only found one distiller who uses this mashbill, but it wouldn't make sense as it likely doesn't have enough stock to share.

Today I'm reviewing its Pecan Rye. Standard Proof takes San Saba pecans from Texas and infuses them into the Rye for 14 weeks.  The label indicates it uses real pecan. The Rye is then filtered through a proprietary process. A 750ml bottle runs about $28.00.

I'd like to thank Standard Proof for sending me a sample of this Rye in exchange for a no-strings-attached, honest review.  And now, it is time to #DrinkCurious.

Appearance:  In my Glencairn glass, this Pecan Rye appeared as a cloudy, bronze-amber color. It left a medium rim on the glass that yielded fat, wavy legs to drop back to the pool.

Nose:  Ethanol was the first thing to hit my olfactory senses despite allowing it to rest in my glass for about twenty minutes.  But, underneath that was the distinct smell of sweet pecan pie. I also found oak, barrel char, and the slightest hint of mint. When I inhaled through my mouth, I was hit with the ethanol again and the mint was more prevalent.

Palate:  My first sip was thin and oily. It was harsh and not enjoyable. At my tasting events, I always tell folks to never judge a whiskey on the first sip.  As I explored further, I unearthed cinnamon and honey-roasted pecans on the front. Mid-palate, vanilla, corn, and nutmeg took over - pretty much the start of pecan pie filling. On the back, milk chocolate drowned everything else out.

Finish:  The milk chocolate was rounded by oak and candied pecan. It took several sips to figure out because the finish was so short.

Bottle, Bar, or Bust:  As I stated earlier, my initial experience was not pleasant. But, as I continued to sip, it improved.  Each time I swallowed, I picked up a stronger and more dominant note of milk chocolate. The finish never added length. The ethanol eventually burned off but it took over thirty minutes to happen. I don't mind at all allowing whiskey to breathe, I do it all the time as my standard tasting procedure. However, I don't usually have to wait as long as I had to for things to open naturally. This Pecan Rye was decent. I couldn't tell you about the quality of the Rye used as any real Rye notes were masked by the pecan. I've tested and reviewed other Pecan whiskeys that proved superior to the Standard Proof version and priced competitively so. As such, I'm extending a Bar recommendation.  Try this one before you commit to a bottle. Cheers!

Posted by Whiskeyfellow at 6:44 AM