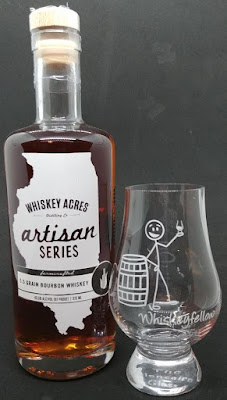 This review was originally published on November 8, 2018, on Facebook.
I’m always excited when something new and unusual comes out. Sure, there’s always a new brand coming out, but every so often, someone releases their own distillate that is uniquely their own. It provides an opportunity to rock the market. Conversely, it can also be risky, and if not well-received, can squash someone’s dreams (and investment).
Whiskey Acres Distilling Company is a farm-to-bottle distiller. They grow and harvest their own grain, distill it, age, and bottle it in Dekalb, Illinois. They age whiskey in 15-gallon barrels. Recently, I was provided a sample bottle of their very-soon-to-be-released Artisan Series 5.5 Grain Bourbon Whiskey. I thank Whiskey Acres for their generosity and understanding that it will be used for an honest, no-strings-attached review.
I’m sure the first question to hit your mind (because it was mine) is, “What the heck is a 5.5 Grain Bourbon?” I’d never heard of half-grain before! As it turns out, the mash is made of 50% yellow dent corn, 10% Oaxacan green corn, 10% rye, 10% oat, 10% wheat and 10% malted barley. That’s either five or six grains, right? Well, not the way Whiskey Acres markets it. They consider two types of corn to be less than two grains. If nothing else, it is certainly an “attention getter” and memorable.
Using those 15-gallon barrels, 5.5 Grain Bourbon is aged for two years and 11 days. That may not seem like much, but when you consider the smaller barrels, things tend to age more quickly. Whiskey Acres then proofed it down to 87° and packaged it in 375ml bottles with a suggested retail of $29.99. Do the math, and that’s a $60 standard bottle, which is at the higher end of craft Bourbon.
The big question, as always, is, how’s it taste? Time to #DrinkCurious and find out.
Appearance: In the glass, it was a darkish amber, suggesting an older whiskey if not but for the fact this was aged in smaller barrels. A gentle swirl left a medium-rim on the wall of my Glencairn and produced fat legs that stuck in place like glue. They eventually fell but put an expectation in my mind this would be a full-bodied whiskey.
Nose: Ethanol was present, but after letting the glass rest several minutes, it eventually dissipated. Holding my glass at my chin level brought oak and corn. Rolling the rim on my chin side to side allowed the oak to give way to a hint of stone fruit. Lifting the glass to my lips brought a much more obvious cherry that caused my mouth to water. Wafting into my nostrils the cherry went from tart to sweet. Inhaling through my lips brought corn and vanilla.
Palate: The first sip was a watery mouthfeel that was unexpected. There was nothing harsh that you can sometimes experience with a rapidly-aged whiskey, and the wheat gave it a certain airy quality, almost like filtered water. Up front, flavors of sweet corn and oak mimicked the nose. At mid-palate, creamy vanilla with the slightest hint of stone fruit, and, in the back, the mild spiciness of the rye jumped out.
Finish: The finish was, well, different. Initially, disappointment came over me because it was almost non-existent. But, 30 or so seconds later, it popped out as a complex smattering of oak, black pepper, clove, and vanilla that hung around several minutes. It turned my frown upside down.
Bottle, Bar, or Bust: This is, without a doubt, an unusual craft whiskey. If you have an adventurous palate and truly embrace the #DrinkCurious lifestyle, a 375ml for $29.99 is a nifty investment that will give you something to talk about and share with like-minded friends. I’m in that group and as such, rate it a Bottle. However, if you’re into more traditional Bourbons and are uncomfortable stepping outside your comfort zone, then this is one you should try at a Bar (or in this case, at the distillery). Cheers!
My Simple, Easy-to-Understand Rating System
Posted by Whiskeyfellow at 6:11 PM