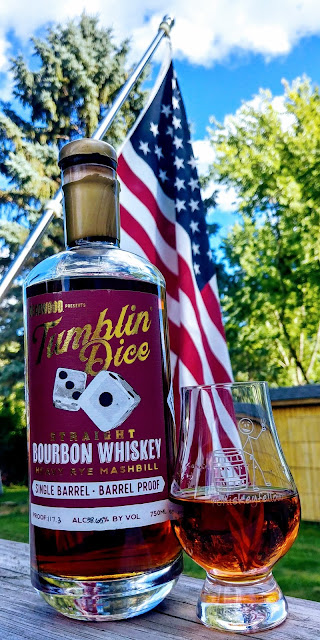 Barrel-proof whiskey can usually be counted on to be something special. Single barrel whiskey can as well. So, when you have a combination of the two in one bottle, that must mean it is special, right? Yeah, back that truck up a second.

Whiskey is many things, but consistency in either barrel-proof or single-barrel is not part of that equation. There are no two barrels that are exactly alike. It doesn't matter if you've got the same mash, take it from the same fermentation tank, distill it in the same run, cooper the barrels on the same day from the same shipment of staves, fill those barrels on the same day, place them next to each other for the exact amount of time, etc., I'm here to tell you, with 100% certainty, that those two barrels will not taste the same. It just isn't possible. That's the beauty of single-barrel whiskey - it is always something new.

Today I'm reviewing Tumblin' Dice 4-Year Old Single Barrell Barrel Proof Bourbon. I've already reviewed the 100° Small Batch version, and if you'd like to learn about Tumblin' Dice and read my tasting notes and rating, you can do so here.  Long story short, I loved it. But, again, this is a single barrel and it is barrel proof, so we're looking at a totally different animal.

What's the same?  Both are four years old. Both are from the same mashbill of 60% corn, 36% rye, and 4% malted barley. Both are straight Bourbons. Both are sourced from MGP of Indiana.

One interesting note that some folks misunderstand. This is a single-barrel Bourbon, but the label also says Sourced Small Batch.  Believe it or not, there is no legal definition of small batch.  It can consist of 10,000 barrels or just one, and there's no risk of running afoul of TTB labeling requirements.

The proof on this barrel is 117.3°, and the suggested retail is $60.00. Remember that as we go through the tasting notes.  Before I get there, though, I'd like to thank Proof & Wood Ventures for providing me a sample of this Bourbon in exchange for a no-strings-attached, honest review. With that being said, it is time to #DrinkCurious.

Appearance:  In my Glencairn glass, Tumblin' Dice appeared as a deep, dark chestnut color. It left a very thin rim on the wall, and fat, heavy, fast legs dropped back to the pool of liquid sunshine.

Nose:  There was a blast of dark fruits that hit my olfactory senses. It was difficult to get past that, but I was able to discern aromas of brown sugar and vanilla. Interestingly enough, there was a complete lack of ethanol or wood on the nose! As I inhaled through my mouth, light vanilla caressed my tongue.

Palate:  The mouthfeel was thick and full-bodied.  On the front of my palate, I found cinnamon, dark chocolate, and nutmeg. As the liquid worked its way back, plum, cherry, and brown sugar took center stage. Finally, on the back, a blend of cocoa powder, almond, and rye spice.

Finish:  Here's where things get interesting. The finish was all spice but it wasn't overwhelming. It started with toasted oak, which was joined by white pepper, pink pepper, tobacco leaf, and then, after things were about to fall off, that toasted oak got very dry. There was a tinge of "heat" involved, but far less than you'd ever expect for 117.3°.  The entire thing was medium-to-long, and it did leave a bit of a zing on the hard palate.

Bottle, Bar, or Bust:  Earlier I said to keep the proof and price in mind, and now I'll reveal why. For a four-year Bourbon, this is mind-blowing. Normally I don't compare younger Bourbons to older counterparts, but I'd throw this one up against anything double or even treble its age statement and sit very comfortably with that challenge. This is an amazing MGP barrel and was I on the barrel selection committee, I would have jumped all over this. Then, there's the price. This is a no-brainer. If you told me it was $80 or so, I wouldn't flinch. If you haven't yet guessed, this is an easy Bottle recommendation. Cheers!

Posted by Whiskeyfellow at 9:49 AM