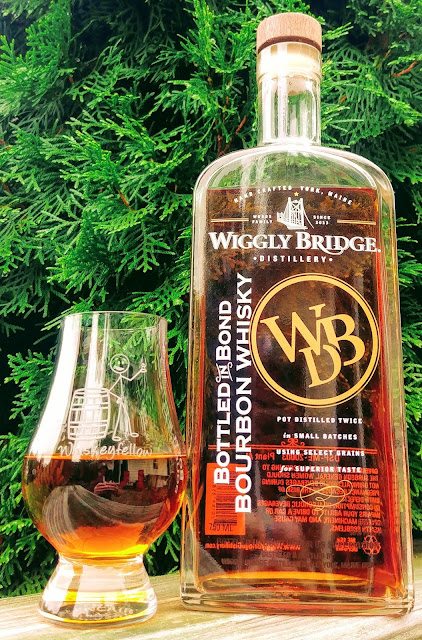 Did you know they were making Bourbon in Maine? I mean, yeah, Bourbon is made in every state, but have you heard of Bourbon from Maine? Until this bottle from Wiggly Bridge Distillery hit my hands, I hadn't.

A dinner discussion between father and son David and David Woods casually led to a joke about starting a distillery. Soon, that joke became very serious. David Jr. learned how to craft copper, and he designed a 60-gallon, hand-made still, by - get this - watching YouTube videos! Fast-forward to now, and they've released a Bottled-in-Bond Bourbon, their first using standard, 53-gallon barrels. All of Wiggly Bridge's products are distributed in Maine, Washington DC, New York, California, Massachusetts, New Hampshire, and New Jersey with plans to continue expansion.

This Bourbon is twice-distilled from a mash of 58% corn, 37% rye, and 5% malted barley. The Woods use a Scottish whisky yeast to get things fermenting. The distillate is then poured into new, medium-toasted #3-charred oak barrels and allowed to rest four years before being dumped. Obviously, as this is a bonded whiskey, it is 100°. A 750ml bottle will set you back roughly $69.99.

I'd like to thank Wiggly Bridge for sending me a sample of this Bourbon in exchange for a no-strings-attached, honest review. Now it is time for me to #DrinkCurious and let you know my thoughts.

Appearance:  In my Glencairn glass, Wiggly Bridge appeared as burnt umber in color. It left a medium-thick rim on the wall with heavy, slow legs that dropped back to the pool.

Nose:  Corn was the first note I picked up. It was followed by cinnamon, toasted oak, and mint. When I inhaled through my lips, caramel rolled across my palate.

Palate:  A thick, watery mouthfeel started things off. Considering the proof, the watery quality was unexpected. There was very little ethanol. Similar to the nose, corn was the first thing I tasted. The front was joined by caramel. At mid-palate, the caramel continued and was blended with dried cherry. Then, on the back, I discovered black pepper and dry oak. Very dry oak.

Finish:  The finish had me fooled. First, it was medium in length. I took another sip, and then it became a locomotive, just chugging along without end. Barrel char and clove stuck around for many minutes, and when that subsided, it was oak. The oak was so dry there was almost pucker power to it.

Bottle, Bar, or Bust:  Wiggly Bridge Bottled-in-Bond Bourbon is not complex, but it is far from boring. There are enough surprises to keep things interesting. Frankly, I enjoyed it, even the extraordinarily dry quality on both the back and finish. And, while I'm happy to have it in my whiskey library, the price is a stumbling block. A $70 price tag breaks the glass ceiling of craft whiskey. Were it priced $10-$15 less, it would get a Bottle rating. At this price, my recommendation would be to try it at a Bar first. Cheers!