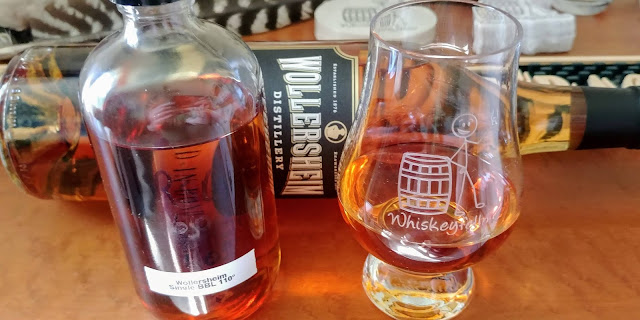 I get excited when a local distillery releases something new. There's just something cool about watching growth and maturity happen. Located just outside of Sauk City, the Wollersheim Winery has been around since the 1840s. The distillery is much, much younger. Due to a change in Wisconsin law, wineries were allowed to start distilling in 2009. Shortly thereafter, they started making brandy. In 2015, a separate distillery building was constructed, and Tom Lenerz, the master distiller, started experimenting with Bourbon and Rye.
Fast forward five years and Wollersheim is getting ready to release its first Single Barrel Rye.  That starts with Barrel 16021, distilled in 2016.  Created from a sweet mash of 66% of rye, 22% yellow corn, and 12% malted barley, all of the ingredients came from Wisconsin. Even the barrels were Wisconsin-sourced. The wood was seasoned for two years, then, after being coopered into 53-gallon barrels, were first toasted then subject to a #3 char treatment.  It came out of the barrel at 110°, and a 750ml will set you back $49.99.
I'd like to thank Wollersheim Distillery for providing me with a sample of this Rye in exchange for a no-strings-attached, honest review. Now, it is time to #DrinkCurious.
Appearance:  This Rye appeared as a clear, orange-amber in my Glencairn glass. It made a medium rim, and lead to tiny droplets that eventually became long, slow legs.
Nose:  Floral perfume filled my tasting room.  As I brought my glass to my nose, I inhaled aromas of toasted oak, cinnamon, and vanilla. When I breathed the vapor in my mouth, that vanilla became thick and luxurious.
Palate:  As this whiskey crossed my lips, it was very creamy and coated everywhere, and was very full-bodied. Flavors of cocoa powder and rye spice hit the front.  Mid-palate I tasted smoked caramel, pecan, and mace. Vanilla cream, cinnamon, and toasted oak were on the back.
Finish:  Rounding things out, if you can call it rounding, was unfiltered, gritty barrel char. The cocoa returned, as did the mace, and those were annexed by black pepper and salted caramel. The saline stuck around for a long, dry finish.
I was curious about what water would do to open things up. Using an eyedropper, I added two drops of distilled water.
Nose:  The vanilla became very strong and was blended with smoked oak. The cinnamon was reduced.  Inhaling through my mouth offered me light floral notes.
Palate:  That creamy mouthfeel became even thicker. The pecan took the front stage and morphed into vanilla. Mid-palate suggested black pepper and dry oak. On the back, smoked caramel took over everything.
Finish:  Strangely enough, it seemed like the proof increased with water. Things were bolder. If you took toasted oak and dropped that in cinnamon syrup and let it rest for, say, a month, that's what you would have here. It produced a lot of heat. The barrel char was still there, and beneath all that was berry.  It didn't last as long as the neat pour did, but I was shocked nonetheless.
Bottle, Bar, or Bust:   This is a younger Rye.  As a point of reference, I don't compare old Ryes to new ones. It isn't fair. Young Ryes are bold, older ones mellow out. I love each of them for what they are. Saying that I found Barrel #16021 to be balanced while offering a lot of flavors. I particularly enjoyed the transition from smoked to salted caramel. Between the neat and "proofed down" (if you can call it that) pours, I definitely preferred it neat. For $50.00, that's right in the sweet spot for craft whiskey and shouldn't chase anyone away.  I'm happy to have this in my library, and I believe you will, too. It takes my Bottle recommendation. Cheers!
My Simple, Easy-to-Understand Rating System
Posted by Whiskeyfellow at 6:04 AM