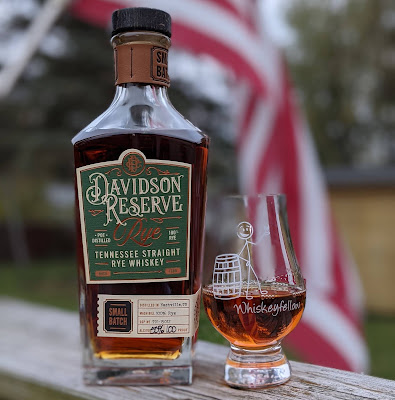 Rye whiskey. It usually comes blended with grains other than rye.  You can have anything from barely legal stuff like Rittenhouse Rye, which is only 51% rye content, or you can go all the way up to 100% rye.  The barely legal stuff tends to attract more Bourbon drinkers who don't care for Rye because, well, it is not too far off of Bourbon. It will have lots of vanilla on the palate. Then, those who say they don't care for Rye typically get into the higher rye mashbills.
Today I'm sipping a 100% rye mash from Pennington Distilling Co. under their Davidson Reserve brand. Who is Pennington, you might ask?  My recent review of its Genesis Bourbon can provide you all the background of the distillery.  The white cereal rye was grown at Renfroe Farms in Huntigdon, about two hours away from Nashville, where Pennington is located before being mashed and then sent through its pot still.  That's then aged for an undisclosed period of time in 53-gallon new, charred oak barrels.  Pennington then dilutes it to 100°, and a 750ml bottle will set you back about $49.99, which is an average price for craft whiskey these days.
I'd like to thank Pennington for sending me a bottle of this Rye in exchange for a no-strings-attached, honest review. That being said, it is time to #DrinkCurious.
Appearance:  In my Glencairn glass, this whiskey was a definitive chestnut in color. There was no cloudiness. It left a medium-thick rim on the wall that led to just a wavy curtain of legs to drop back to the pool of liquid sunshine.
Nose:  As I was waiting for this Rye to breathe, I could smell fruit from across the room. When I approached the glass, the fruitiness was subdued by maple syrup. But, behind that were plum, orange zest, cinnamon, and, finally, toasted oak.  When I inhaled the vapor through my mouth, the flavor of baked apples danced across my tongue.
Palate:  The mouthfeel was very oily and coated everywhere, giving it a medium body.  Toffee was the first thing to it my palate, and on the front, it was joined by toasted oak. Come mid-palate, leather, mint, and rye spice were highlighted. Then, on the back, I tasted black pepper, dry oak, and tobacco leaf.
Finish:  A long sweet and spicy finish consisted of cinnamon red hots, baked apple, and barrel char.  When I thought that was all over, herbal thyme made a brief appearance.
Bottle, Bar, or Bust:  I enjoy barely legal Ryes and I enjoy 100% Ryes. They are two completely different animals. This was one of the better 100% Ryes I've had, offering a gorgeous nose and complex palate. The spice was enough to keep things interesting without being dominating. The sweetness was complimentary. There's absolutely nothing not to like, no matter where on the rye content scale you relish. When I consider the price, this is a no-brainer Bottle rating. Cheers!
My Simple, Easy-to-Understand Rating System
Posted by Whiskeyfellow at 6:00 AM