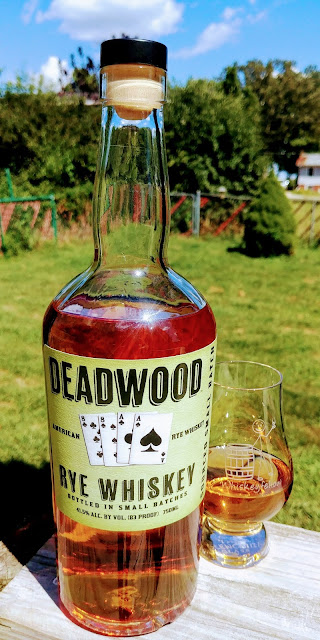 The old West was full of romanticism regarding ranchers and cowboys, about gunfights in the middle of the street at high noon. And then, of course, there were the saloons. Often the center of attention on the frontier, saloons served as the watering hole, the theater, and the whorehouse.  It was also a source of tall tales and outlandish characters. One such personality was Bill Hickok. He worked a variety of jobs and was rumored to have killed dozens of men until his untimely death. As it turned out, Hickok was a good storyteller and that's about it. He did kill a few men, but the more accurate number was closer to six.  He did some embellishing, no doubt.

Today I'm reviewing Deadwood American Rye by Proof & Wood Ventures. One of the things I appreciate from Proof & Wood is the transparency aspect. While everything is not disclosed, everything you need to know is disclosed so that, with little effort, you can fill in the blanks on your own. You'll notice a few things when you look the bottle over. Go to the backside and you'll see an age statement:  Carefully aged in full-size American oak barrels at least 24 months. Between the front and back are the very bold words, Sourced Small Batch.

For example:  Distilled in Indiana and Tennessee tells you this comes from MGP and George Dickel.  They aren't the only distillers in each state, but they're the two that provide a lot of sourced whiskeys to the rest of the country. What's interesting, however, is that Dickel doesn't have its own Rye. Guess where Dickel gets theirs? MGP!  Well then, why isn't this just sourced from MGP?  Because Dickel takes the MGP stock and runs it through the Lincoln County Process (LCP), which is charcoal filtering designed to remove any harshness and add a smoothness factor.

Finally, you'll find the word straight curiously missing. It isn't the age that prevents that statement - all that's required is two years in new, uncharred oak. Is that due to the LCP? Is there some adulteration that takes place? Or, is it missing words? Remember, we're told full-size American oak barrels. Not new and not charred, although the charring quality becomes obvious. Bottled at 83°, a 750ml will set you back a mere $20.00, making this a very affordable choice.

The most important question you should be asking yourself, though, is Is it any good? I'm here to answer that. Before we #DrinkCurious, however, I'd like to thank Proof & Wood for sending me a bottle in exchange for a no-strings-attached, honest review.  Let's get to it.

Appearance:  In my Glencairn glass, Deadwood American Rye appears the color of honey. It is crystal clear and left a medium rim that gave rise to watery, heavy legs.

Nose:  While I was allowing the whiskey to rest, the room filled with the aroma of menthol. Once I brought the glass to my face, the menthol was joined by mint and oak.  As I inhaled through my lips, dill ran across my tongue.

Palate:  As the liquid sunshine rolled across my mouth, it was thin and watery. Barrel char was the first thing that I tasted. There was also a smoky quality beyond that char. Mid-palate was sweet brown sugar and heavy rye spice. On the back was cinnamon.

Bottle, Bar, or Bust:   As I drank it, I was torn between the brash flavors and my desire to slam my fist on the bar and scream Smooooooth! It was obviously young and uncomplicated. With that boldness, it would do well in most cocktails. I can't say that I would choose this for a neat pour. Given its already low proof, I'd not want to experiment with water. If you want affordable rye for mixing, this is worthy of consideration. That's not what I look for in whiskey and as such, this one earns a Bar recommendation. Cheers!