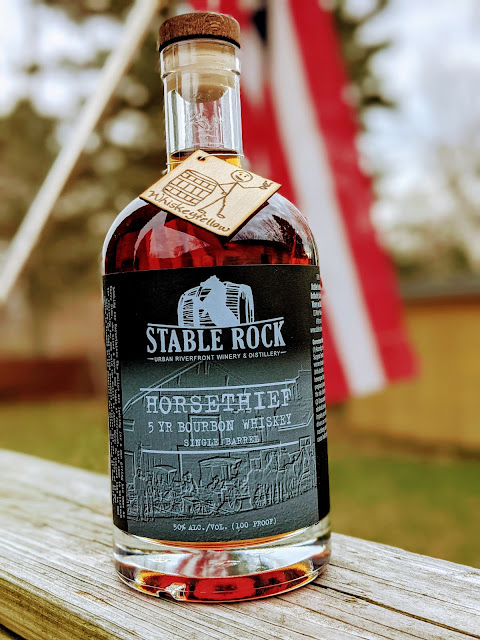 I relish the opportunity to discover new distilleries. If something is completely off the radar, that's something that grabs my full attention.  Sure, what they have to offer may not be their own distillate, what they sell may not even be good, but it is still exciting. I am always curious about what will happen down the road.  Will they be successful? Will they grow? Will they be able to keep customers happy when they switch from sourced distillate to their own?

In Wisconsin, I've been blessed to visit several of these newcomers. Some have enjoyed tremendous success, others haven't yet caught on.  But, one distillery that just opened this summer is Stable Rock Winery & Distillery in Jefferson.  If you're familiar with Lewis Station Winery in Lake Mills, Stable Rock is its sister operation. Owned by Rob and Michelle Lewis, Stable Rock's property is a historical landmark with a colorful past.  The building, nestled against the Rock River, was erected in 1903 as the Boll's Livery & Blacksmith Shop at 123 Milwaukee Street.

In 1921, Boll bought a Ford Omnibus and ran the Jefferson Bus Line. Then, he ran an auto livery service from the property. Shortly thereafter, Boll passed away and his son auctioned it off. It then became a Buick garage, and in 1931 AO Pop Seeds took it over until the 1960s. Afterward, it was the home to several restaurants and bars before the building was abandoned and fell into disrepair in 2016. Rob and Michelle saved the building from destruction when they agreed to buy and renovate it, finally opening the Winery and Distillery this past summer. 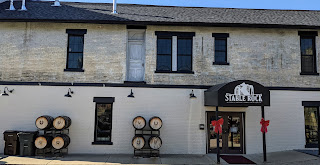 Just released from Stable Rock is Horsethief 5-Year Single Barrel Bourbon.  We can do the math and figure out that if Stable Rock just opened this summer, then there's no way they have a five-year Bourbon from their own distillate. Rob considered sourcing from Dickel in Tennessee, an undisclosed Kentucky distillery, and MGP out of Indiana. He settled on MGP.  After tasting from over twenty barrels, he and his staff found one that they unanimously agreed upon, and was distilled from a mash of 75% corn, 21% rye, and 4% malted barley.

"Looking for the Horsethief - the police are looking for a man giving his name as Harry Sims, who hired a horse and buggy in Jefferson, then came to Watertown the following day and sold the outfit to James Dowd. He claimed that he had been on the road selling household articles, but was tired of it and wanted to dispose of the property. The horse was hired at Tony Boll's." - Stable Rock Winery & Distillery

Rob told me he felt the optimal proof would be 100°.  I purchased my 750ml bottle of Horsethief for $45.00. All of this information is well and good, but what really matters is how this Bourbon performs, and the only way to learn that is to #DrinkCurious.

Appearance: In my Glencairn glass, Horsethief offered a deep caramel manifestation. It created a medium rim that led to slow, thick legs.

Nose:  A sweet, fruity aroma filled the air.  It began with vanilla and brown sugar. Candied fruit was next, followed by toasted oak and cinnamon. When I inhaled the fumes through my lips, heavy berry and vanilla ran across my tongue.

Palate:  From the start, the mouthfeel was oily and full-bodied. The experience went from sweet to spicy. On the front, I tasted caramel and vanilla cream. At mid-palate, flavors of cherry and plum ended with cocoa. On the back, I found clove, dark chocolate, and oak.

Finish:  Similarly to the palate, the finish was initially sweet, then spicy. Except, it circled back around. Berry initiated the journey, then oak and black pepper showed up, and as that faded, it featured a smoky char and rye spice that lasted for several minutes. When I was convinced it finally subsided, warm vanilla took over. This was one of the more long-lasting finishes I've waded through, and my hard palate had a slight tingle.

Bottle, Bar, or Bust:  The very cool thing is that if you purchase a wine flight, you can include Horsethief in the mix so you're able to try before you commit. I've had some very good MGP barrels and some that are mediocre (or even less so). This is a 5-year single barrel MGP Bourbon that has a lot going for it. It had a welcoming nose, a fairly complex palate, and a never-ending finish that made me anxious for another sip. When you take into account the affordable investment of $45.00, this is the recipe for a Bottle rating.  Cheers!

Posted by Whiskeyfellow at 6:03 AM