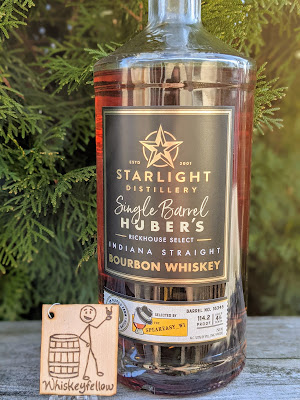 With this review, I'm starting something different. I'm no longer including a rating on barrels that I've been invited to pick. My standards are strict. It is safe to assume that if I've been involved in the pick, it will always get a Bottle rating, otherwise, I would reject the barrels.

If, when you read the words, Indiana Straight Bourbon you're assuming that means it is sourced from MGP, you should do a hard reset of your mind. Starlight Distillery may be small but they've been garnering a lot of attention, and it is well-deserved.  Starlight was born from the Huber Orchard, Winery and Vineyards, located in Starlight, Indiana. It traces its roots back to 1843 when Simon Huber bought his farm and brought his German winemaking experience with him. Fast forward to 2020, and you'll find the seventh generation of Hubers are still running the place. The distillery was founded in 2001, and master distiller Ted Huber and his team create brandy, rum, grappa, vodka, gin, and, yes, Bourbon and Rye.  I've been there, it is a gorgeous campus. If you're ever in Louisville, Starlight is a very short drive north.

Back in September, The Speakeasy_WI was given an opportunity to pick a barrel of Bourbon. The panel consisted of Troy Mancusi, Jason Waugh, Dan O'Connell, and me.  The choices were between a three-grain and three four-grain samples. We unanimously settled on Barrel 16345, the three-grain, distilled from a mash of 58% corn, 27% rye, and 15% malted barley, and then aged 4.5 years in 53-gallon charred-oak barrels. Bottled at a cask strength of 114.2°, it is available exclusively from Neil's Liquors in Middleton, Wisconsin. You can procure a bottle for $49.99 and there are 188 bottles available.  It has lovingly been named Bazoomka Jay.  You can see my mug on the left. 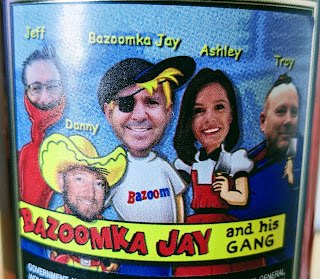 Appearance:  In my Glencairn glass, Bazoomka Jay presented as a beautiful copper-amber color. It generated a medium-thick rim which led to fast, watery legs that raced back to the pool.

Nose: A strong aroma of berries started things off. That was followed by bubble gum, banana, toasted oak, caramel, and corn. When I inhaled the vapor through my lips, it was a blast of vanilla and berries.

Palate: The mouthfeel offered a medium body that became silky. Corn and vanilla kicked things off on the front. Come mid-palate, I tasted butterscotch and mild cinnamon. On the back, I found flavors of cherry, toasted oak, caramel, and char.

Finish:  The experience ended with a very long, spicy finish of clove, black pepper, barrel char, and sawdust. Interestingly, this one drinks much lower than its stated proof. When everything was done, as I thought about what I had tasted, bubble gum came out of nowhere and left almost as fast.

Bazoomka Jay is a wonderful example of what Starlight creates. Grab yourself a bottle before it is gone forever. Cheers!

Posted by Whiskeyfellow at 10:04 AM