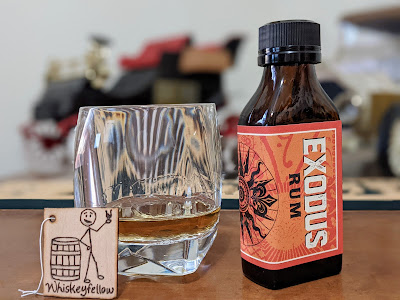 Let's get a few things out of the way here.  I'm Whiskeyfellow, not Rumfellow. My experience with aged rum is very limited, my experience with rum overall involves cocktails. There's nothing in the world wrong with rum, I just enjoy drinking whiskey and there's enough variety to keep me plenty busy.
What, you may wonder, am I doing reviewing a rum, then? Well, this one is special... at least it is marketed as such. You see, this rum has been finished in whiskey barrels!  Whiskey is my jam. I know whiskey. I appreciate whiskey. I love everything whiskey. So, why not?
Being rum-dumb, I wanted to learn something about it before just blindly writing a review. I went to where any spirits-curious person should: Federal Regulation § 5.22 The Standards of Identity.

Class 6; rum. “Rum” is an alcoholic distillate from the fermented juice of sugar cane, sugar cane syrup, sugar cane molasses, or other sugar cane by-products, produced at less than 190 proof in such manner that the distillate possesses the taste, aroma, and characteristics generally attributed to rum, and bottled at not less than 80 proof; and also includes mixtures solely of such distillates.

The rum I'm drinking is Exodus from Proof and Wood Ventures. This isn't your basic white rum. Proof & Wood blends column still rum, pot still light rum, and pot still heavy rum to create this concoction. All of it was distilled in Jamaica. The column still portion was aged for three years in Canada in Canadian Rye casks, then in ex-American Rye casks. The light rum aged for two years in ex-Bourbon casks and then an additional two years in ex-American Rye casks. The heavy rum was aged two years in ex-Rye casks.
Everything remained naturally colored with no added flavors. While we would say everything is aged up to five years, that's not something you'd put on a bottle. Like whiskey, if there's an age statement, it is always the youngest spirit in the mix. Exodus carries no age statement. It is packaged at 84° and you can expect to pay $30.00 for a 750ml bottle.

Before I sip Exodus and do the #DrinkCurious thing, I'd like to thank Proof & Wood for a sample of it in exchange for a no-strings-attached, honest review.

Appearance: Normally, I'd be tasting from a Glencairn glass. But, this time, I used a nice, hefty, crystal rocks glass. It presented as the color of light gold, almost as straw. It left a super-thick rim on the wall, and that rim created heavy legs that caused the rum to fall back into the pool.

Nose: The most obvious aroma was vanilla, so much so that if you dumped vanilla extract in a glass, this is what I would imagine it smelled like. I also found scents of molasses, apricot, and sweet, tropical fruits. When I inhaled the fumes through my lips, a blast of butterscotch exploded in my mouth.

Palate: The mouthfeel was heavy and oily. If this was whiskey, I'd be floored. On the front, and pretty much through the finish, that butterscotch bomb continued. At mid-palate, it was joined by vanilla, honeydew, and brown sugar. On the back, I tasted rye spice and green peppercorn - and then something earthy I couldn't quite put my finger on.

Finish: A medium-to-long finish went from very fruity to spicy. At first, pineapple dominated. That was followed by toasted coconut. Then came toasted oak and green peppercorn. It was the peppercorn that stuck around longer than anything else. That earthiness hung around, too.

Bottle, Bar, or Bust: This was definitely better than anything I've had out of Cruzan or Bacardi. I recall enjoying Appleton Estate, but it has been too many years and my memory doesn't go back that far. I'm not a rum aficionado so my rating is based purely upon a whiskey drinker's perspective: I liked it. I found the earthy quality somehow complementary to the sweet and spicy notes. As far as a value statement, Exodus seems to be fairly priced amongst other 5-year rums. Does this want me to abandon whiskey and jump on the rum bandwagon? No. But, if the occasional hankering for rum came up, I could easily see myself grabbing this (and yeah, I'd drink it neat). Do the math and that adds up to a Bottle rating. Cheers!

My Simple, Easy to Understand Rating System
Posted by Whiskeyfellow at 6:00 AM