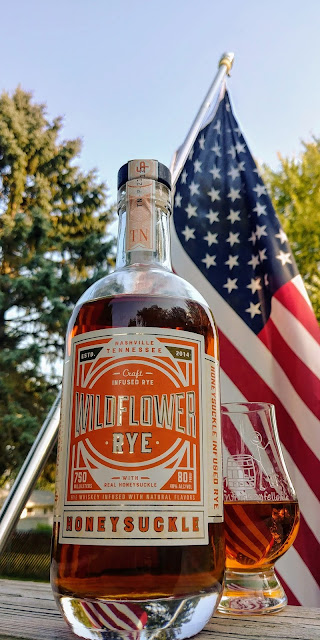 There are some who will not ever consider flavored whiskeys. I believe they're cheating themselves. I find them to be a lot of fun. I'm careful when judging a flavored whiskey to not compare them to their unflavored cousins. Of course, that doesn't mean there aren't bad representatives in the category. That happens with any category (even my favorite Bottled-in-Bond).
You may have seen a lot of advertising lately on social media for Standard Proof Whiskey. This brand is located in Nashville, and they're producing a lot of flavored and infused whiskeys. For all intents and purposes, those terms mean the same thing to me. Either you're using natural or synthetic (or a combination of both) means to add flavor.

Today I'm reviewing Standard Proof's Wildflower Rye, which is infused with real honeysuckle. It starts with a mash of 51% rye, 44% corn, and 5% malted barley. It doesn't say "Distilled By" anywhere on the bottle, so it is a safe assumption it wasn't them. I couldn't even hazard a guess based upon the mashbill who the actual distiller was. Standard Proof indicates they use a proprietary process, and the infusion procedure ran ten weeks. An 80° 750ml bottle will set you back about $28.00.

When a flavored whiskey producer suggests something along the lines that their whiskey is "Great neat, on the rocks, as a shot, or in a cocktail," then their whiskey is subjected to the way I normally drink whiskey - neat.  Before I get to my tasting notes and review, however, I'd like to thank Standard Proof for sending me a bottle in exchange for a no-strings-attached, honest review.  Time to #DrinkCurious.

Appearance:  In my Glencairn glass, Wildflower Rye appeared as a deep orange amber. Unfortunately, as this is not a straight whiskey, I have no idea if the coloring is natural or not. No big deal. It made a medium ring that released thick, fast legs to drop back to the pool.

Nose:  The floral bomb hit me before I could get the glass to my nose. Yeah, there's honeysuckle. But, there was also more, something I could swear was aloe vera. That's a note I've never used to describe any whiskey ever. When I inhaled through my lips, it felt "sticky" as the vapor crossed my tongue.

Palate:  Despite what I just experienced, it was not sickly sweet. It was difficult to discern anything between the front, middle, and back. The palate consisted of corn, something earthy, honey, and a blast of ethanol. If I had to compare it to something, a Ricola honey cough drop comes darned close. Just to double-check my palate, I offered a taste to Mrs. Whiskeyfellow, and as she was describing notes, once I yodled Ricola! she immediately agreed.

Finish:  It was a long finish, far longer than it needed to be. It was sweet with honey and spicy with something.  Try as I might I couldn't identify it beyond a spice of some sort.

Bottle, Bar, or Bust:  With rare exception, I drink all my whiskey neat. I did not give this an opportunity to go over ice, take it as a shot, or to use it in a cocktail because the statement was made it could be enjoyed neat. This might be good in a cocktail. However, I just didn't enjoy anything about this, from the nose to the finish. I wish that wasn't the case, and as such, this one takes a Bust.  Cheers!