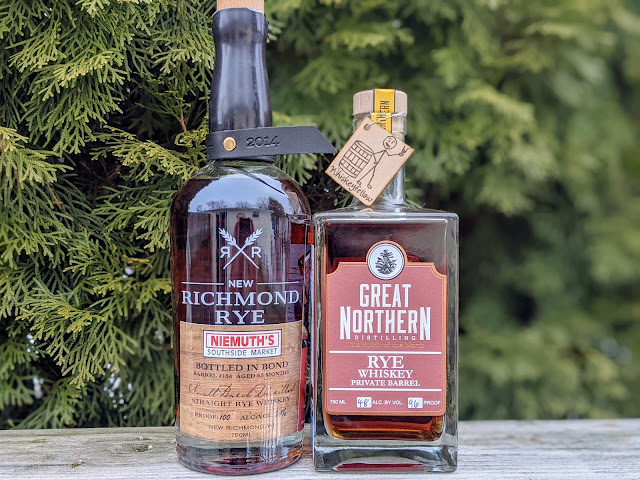 I was recently approached by the folks at Neimuth's Southside Market in Appleton to review a few of their store picks:  Great Northern Rye Dapper and Richmond Rye Lil'Nog'n.  As such, today's review will be a twofer.  As a matter of full disclosure, I was provided samples of each in exchange for my no-strings-attached, honest reviews. 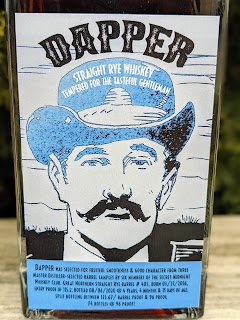 Great Northern Distilling is located in Plover, which is just outside of Stevens Point. Founded in 2014 by its president and head-distiller Brian Cummings, Great Northern sources everything locally and is a big supporter of transparency. He started with distilling rum, then potato vodka, gin, and finally, whiskey.

Our rye whiskey is made in an old east coast style, reminiscent of a Maryland style rye. Different than a Kentucky rye, we use a higher proportion of raw rye grain, rye malt rather than barley malt which gives a more savory rye flavor rather than the sharpness of the barley, and just a touch of corn to round out the edges. - Great Northern Distilling

In the case of Dapper, it is a 4-year, 4-month old single barrel, bottled at 96°, and a 750ml will set you back $52.99.
Appearance:  In my Glencairn glass, Dapper presented as deep amber in color. It left a medium rim that created slow, fat legs to drop back to the pool of liquid sunshine.
Nose:  A jab of caramel was the first thing I smelled. As I continued to explore, I found oak and a big blast of mint. Underneath those was a floral perfume. When I inhaled the vapor through my lips, the floral quality continued.
Palate:  The mouthfeel was thin and oily. It started off on the front as sweet with a burst of caramel, cherry, and floral notes, then at mid-palate, it got very spicy with rye, mint, and oak.  On the back, I tasted leather, clove, char, and coffee.
Finish:  A long (very long) finish was both smoky and spicy. The smoke started off mild and then built quickly. Once it climaxed, rye spice and cinnamon took over. That then became leather and clove, and finally ended with dark roast coffee that stuck around several minutes.
Bottle, Bar, or Bust:  Dapper drinks much higher than its stated proof thanks to how spicy it is. That's not a negative, rather, it is an observation. I enjoyed this, it was interesting, and my favorite part was the finish, particularly the dark roast coffee at the end. Dapper earns a Bottle rating from me.
New Richmond Rye Lil' Nog'n 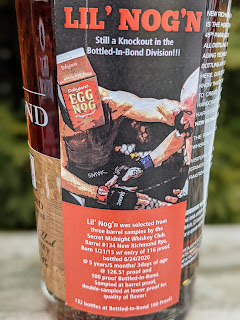 Richmond Rye is distilled by 45th Parallel Distillery out of New Richmond. That's just south of the Minnesota border on the 45th parallel. The 45th is considered the "halfway" point between the equator and north pole. It was founded in 2007 by Paul Werni, it remains family-owned, with a goal of distilling small-batch spirits. Werni started with vodka, then moved onto whiskeys. But, he was contract distilling, with his most widely-recognized client being J. Henry & Sons Wisconsin Straight Bourbon. Then, in 2013, he launched New Richmond Rye, and the rest is history.
Werni's philosophy is one of taking his time to make a quality product.

Today many distillers care more about maturing their spirit quickly with wood extracts. A traditional slow maturation process results in a full-bodied flavor that can only be accomplished from years in high-quality wood barrels. - 45th Parallel Distillery

New Richmond Rye is a 65% rye mash with the remainder being corn and malted barley. Entry proof was 116°.  In the case of Lil' Nog'n, it goes a step further - Barrel #134 is a Bottled-in-Bond single barrel, aged for 5 years and 5 months. Like any other Bottled-in-Bond spirit, it weighs in at 100°, and a 750ml is priced at $42.99.
Appearance:  In my Glencairn glass, Lil' Nog'n offered a deep, mahogany color. It provided a thick rim and heavy legs that came down like a curtain.
Nose:  Caramel and mint were the two dominant aromas. Sawdust, cherry, plum, and cinnamon tagged along. When I inhaled through my mouth, vanilla ran across my tongue.
Palate:  The mouthfeel was creamy and had a medium body. Flavors of crème fresh, plum, and nutmeg were on the front. As it moved across my palate, I tasted cinnamon and brown sugar. The back consisted of rye spice, toasted oak, and the slightest dusting of char.
Finish:  A long, spicy finish featured cinnamon red hots, mint, nutmeg, and dry oak.
Bottle, Bar, or Bust:  Lil' Nog'n drinks at its stated proof. I found this one fascinating, and I understand the reason for its name - it had all the flavors you'd find in eggnog (without the texture, which some people find off-putting). As for me, I love eggnog, it is a treat I look forward to each winter, and, quite frankly, this one is unique. This takes a very easy Bottle rating.
Final Verdict:  The natural question is, Which of the two did I prefer? These are both delicious ryes, full of character and flavor, but I found Lil' Nog'n came out on top. In either case, you'll wind up with a winner. Cheers!
Niemuth's Southside Market is located at 2021 S. Oneida Street in Appleton.
My Simple, Easy to Understand Rating System
Posted by Whiskeyfellow at 6:00 AM