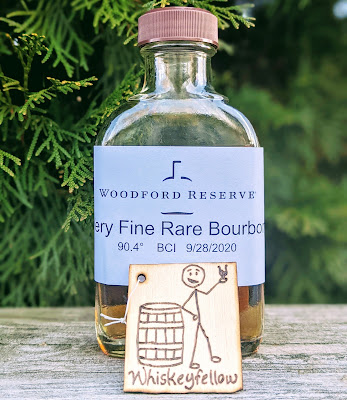 Woodford Reserve shouldn't need an introduction, despite being relatively new to the scene. Established in 1996 and owned by Brown-Forman, Woodford distills on what was the Old Oscar Pepper Distillery, founded in 1812, and whose distillers include Jim Crow and E.H. Taylor, Jr. In 1878, the distillery was then renamed the Labrot & Graham Distillery. The distillery was then shuttered in 1918 due to Prohibition, where it remained vacant until 1935 when it was rebuilt. In 1941, Brown-Forman acquired the premises and ran the distillery until the 1960s before it was mothballed and sold to a local farmer. No distilling took place for many years, and in 1993 Brown-Forman repurchased the property and rebuilt the distillery once again.

The Master's Collection came about as a means for Woodford Reserve to pay homage to the discoveries and innovations that have taken place by master distillers over the distillery's storied past. This is the 15th year of The Master's Collection, all of them slated to never be repeated, and will hit shelves on December 1st. It will be known as Very Fine Rare Bourbon and marks a new milestone where this and all future releases will focus on modern innovations by Master Distiller Chris Morris and Assistant Master Distiller Elizabeth McCall.

“The name Very Fine Rare Bourbon is a nod to the descriptors used by our ancestors to auction highly-aged Bourbon barrel lots. While Woodford Reserve will always honor the past, this Master’s Collection is about the present and future.” - Chris Morris

Very Fine Rare Bourbon carries no age statement, however, part of the blend contains the oldest Bourbon ever released by Woodford - 17 years - which is a nod to Chris being named Master Distiller back in 2003. I asked him what the youngest barrel was, and he replied 11 years. Additionally, he let me know there is at least one representative barrel for every year in-between except for 12. This Bourbon also will be the first time Elizabeth's name is on the hangtag.

Very Fine Rare Bourbon is made from the same mash, the same 110° entry proof, the barrels rested in the same heat-cycled rickhouses, and when dumped proofed down to the same 90.4° as the standard Woodford Reserve.

There were just shy of 300 barrels used in the batch, many of which were very short due to Woodford's average 18% per year angel's share. It will be available only in select US and global markets. Suggested retail for a 750ml bottle is $129.99, but your shopping experience may vary. When you go looking for it, don't bother seeking out the pot-still-shaped Master's Collection bottles of prior releases, that's been changed (you can see a photo below).

I'd like to thank Woodford Reserve for providing me a sample of Very Fine Rare Bourbon in exchange for a no-strings-attached, honest review. It is now time to #DrinkCurious and discover what this Bourbon is all about.

Appearance:  In my Glencairn glass, this Woodford Bourbon is presented as the color of a yellow sunset. Yeah, I know, that's a weird description, but that's what it looked like to me. It created a thick rim and fast, sticky legs that took forever to make it back to the pool of liquid sunshine.

Nose:  This Bourbon was very aromatic and fruity, so much so that Mrs. Whiskeyfellow, sitting across the room, told me it smelled delicious and inquired what I poured. Plum, cherry, berries, and citrus mingled together. Hidden beneath the orchard of fruit were chocolate and clove. What was shockingly lacking was I smelled no wood whatsoever. When I inhaled the vapor in my mouth, I found spearmint and vanilla.

Palate:  As the whiskey crossed my lips, the mouthfeel was oily and viscous. There was nothing in terms of alcohol burn. On the front, I tasted butterscotch and orange peel. Come mid-palate, flavors of plum, berry, and white chocolate continued the sweet trend. On the back, wood finally made an appearance. It was toasted oak, and it mingled with almond, leather, tobacco leaf, and cocoa powder.

Finish:  The finish began with oven-roasted walnuts, and the toasted oak, leather, and cocoa from the back palate carried over. Flavors of sweet vanilla and clove rounded out for what was a long, drawn-out finish.

Bottle, Bar, or Bust:  Woodford Very Find Rare Bourbon provided me a complex nose, palate, and finish that I thoroughly enjoyed. Some folks may complain that a $130.00 whiskey with no age statement is not worth the price. I'm not in that camp - for me, age is just a number. What matters is the whiskey inside the bottle and if I taste value for the investment. I would drink this all day long and wouldn't feel cheated. The Bourbon earns my coveted Bottle rating, and I believe you'll agree. Cheers! 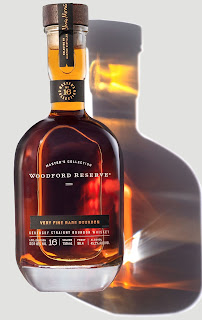