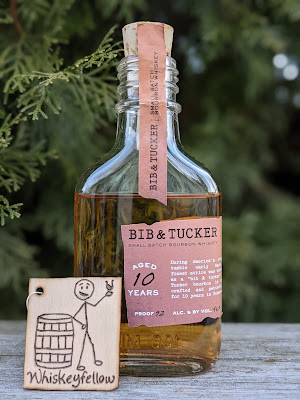 Let's talk about truth and bias. Bib & Tucker has been the butt of some of my jokes for a long time. The reason for that? I got together with a couple of buddies ("Made Man" Bob Howell and "Made Man" Brent Sehnert of Sips, Suds, and Smokes) several years ago, and I was allowed to choose a bottle of anything at Brent's house to try. I saw the fancy bottle, which I've seen many times before, and they both started giggling like schoolgirls. They then put on straight faces (or attempted to) while I took my sip, then couldn't contain themselves and busted out in full belly laughs as they watched my reaction. It wasn't pretty.
One of the first podcasts I was interviewed on was The Podcask with The Greeze and Will Haynes. They started joking around about Bib & Tucker, and yeah, I joined in on the fun.
My point is, I didn't like Bib & Tucker and I wasn't really interested in ever revisiting it, my #DrinkCurious lifestyle be damned. But, a few weeks ago, as I was commenting on it in a Facebook discussion, I was approached by its brand representative who asked if I'd be willing to try the 10-year expression. I agreed, and the sample arrived the other day.
I sat there for a day or so staring at the bottle, wondering about how it would taste. One thing for sure was it couldn't taste itself, and dammit, this is what I do. Good, bad, or ugly it was time to review it! But, the absolute honest truth is, I'm biased.
What, exactly, is Bib & Tucker?  It is a sourced Bourbon from Tennessee. The distillery itself is undisclosed, but it is made from a mash of 70% corn, 26% rye, and 4% malted barley. I went through my stack of reviews but couldn't find a distillery with that same mash. Whoever does the distilling, it is twice-distilled, once in an extended column still, the second time in an old-fashioned pot still. The newmake is poured into #1-charred white oak barrels and is left to age a decade. Bib & Tucker states its entry proof is lower than the average of other Bourbons. The whiskey is non-chill filtered and bottled at 92°. You can expect to spend about $75.00 on a 750ml.
I've penned all of this while the Bourbon was relaxing in my glass, letting it oxidize. Before I get to the tasting notes, I'd like to thank Bib & Tucker for sending me this sample in exchange for my no-strings-attached, honest review.
Appearance:  In my Glencairn glass, Bib & Tucker 10-year presented as chestnut in color. It left a thicker rim on the wall, and that led to watery legs to fall back into the pool of whiskey.
Nose:  A combination of sawdust and toasted oak hit my nostrils first. My guess is that was from the #1-char level. I also picked up aromas of orange and vanilla, but not what I would describe as a creamsicle. When I inhaled through my lips, it became cherry vanilla.
Palate:  I found the mouthfeel to be oily and offered a medium body. On the front, I tasted vanilla and orange peel. At mid-palate, it was salted caramel. Then, on the back, toasted oak and clove.
Finish:  The medium-short finish consisted of toasted oak, caramel, and cola.
Bottle, Bar, or Bust:  Here's the scoop. Bib & Tucker 10-year didn't deserve the loathing I anticipated. It wasn't bad at all. However, it also wasn't great. It was, in a term, Plain Jane. There was nothing exciting about it. If this was a $30 or $40 Bourbon, I could see myself saying, "Go for it." But, for $75.00, I expect more.  If you're a fan of the 6-year Bib & Tucker, the 10-year is something you'll probably want in your home bar. For me, though, I can't give it a rating other than Bar.  You'll definitely want to try this one before making the investment.  Cheers!
My Simple, Easy to Understand Rating System
Posted by Whiskeyfellow at 6:00 AM