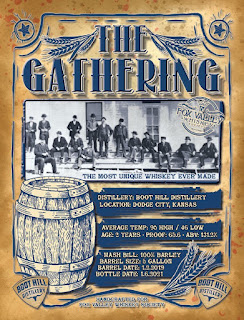 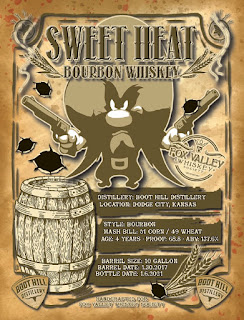 Every now and then, I'm asked by friends and whiskey clubs to review something special for them. I'm always happy to do that, and the only thing I ask is they provide a sample. This time, it was the Fox Valley Whiskey Society (FVWS) out of Illinois. They've selected two barrels from Boot Hill Distillery out of Dodge City, Kansas.
Both of these whiskeys were aged in smaller barrels.  That can be a risky venture because it is too easy to have flat, over-oaked notes as the whiskey ages rapidly compared to slowly maturing in 53-gallon barrels.
Because these bottles are not for sale, there's no real point in offering my Bottle, Bar, or Bust rating. However, I'll give a summation of each. I'd like to thank FVWS for this opportunity to #DrinkCurious.
The Gathering 100% Unmalted Barley Whiskey
I got excited when I found out one of the two whiskeys was a 100% unmalted barley mash. I'd never tasted one before, and according to the FVWS, the TTB hasn't received any registration requests for one, either. Because it isn't malted, we don't get to call it an American Malt.  The TTB also couldn't find a category that fit the mash, and as such, went with the very generic Whiskey genre.  It was nicknamed The Gathering which is based on a debunked photo of Wild West legends Wyatt Earp, Billy the Kid, and even included Teddy Roosevelt. 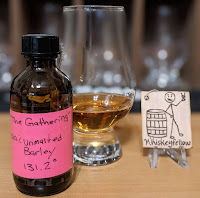 The Gathering rested two years in 5-gallon, #3-charred oak barrels. It came out at a whopping 131.2°!  The yield was only 21 bottles, but, remember, this was a small barrel to begin with.
Appearance:  In my Glencairn glass, The Gathering presented as the color of bronze. It formed a micro-thin rim that generated thick, fast legs to drop back to the pool of this very unique whiskey.
Nose:  I found the nose to be challenging. It wasn't that there was nothing there - rather, they were competing against each other. I found menthol, oak, chocolate, honey, and dried apple slices. When I inhaled through my mouth... well, the best way to describe this is Strawberry Fruit Roll-Ups.
Palate:  The mouthfeel made no attempt to hide the proof. It was very hot and quickly made the hard palate tingle. Pear and honey were on the front. The middle consisted of cooked peaches and tropical fruits. The back is where the sweetness fell off and cinnamon, clove, and dry oak took over.
Finish:  The Gathering had an incredibly long finish.  I timed it, and it ran almost three minutes before petering out. There was a hint of walnut, which was immediately quashed by sweet tobacco leaf. Then the cinnamon Red Hots came around the corner looking to see who was in its neighborhood and it stuck around in case anything else wanted to show up. As it finally faded, the dry oak from the back made a brief encore.
Verdict:  The unmalted barley was fascinating. It was definitely not Scotch-like, nor Irish-like, and, for that matter, it was unlike anything else I've ever tasted. Unique is something that always gets my attention, and The Gathering did it in a very creative manner.  This is a winner.
Sweet Heat Wheated Bourbon

Next up is a wheated Bourbon called Sweet Heat.  Distilled from a mash of 51% corn, and 49% wheat.  If you're scratching your head wondering where the malted barley is, don't fret.  There isn't any. Instead, Boot Hill used an artificial enzyme to get the fermentation going.  It aged just shy of four years in a 10-gallon, #3-charred oak barrel. Weighing in just below hazmat with 137.6°, the yield was 31 bottles. 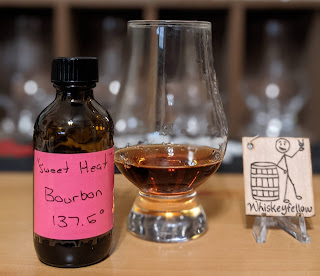 Appearance:  I was initially shocked by the color until I remembered only a 10-gallon barrel was used. Deep and dark, it formed a thin rim and medium-thick, sticky legs.

Nose:  Dark chocolate was the dominating aroma, with thick caramel underneath. Then, I smelled cherry schnapps. When I brought the vapor into my mouth, the schnapps changed to cherry pie filling.

Palate:  A thin and oily mouthfeel lacked the expected heat from the proof. Oak was definitive on the front and carried across the palate. I struggled through it and tasted cocoa and cherry mid-palate, with leather and sweet chili pepper on the back.

Finish:  The finish was long and dry.  What stuck around was dry oak, barrel char, old leather, and black pepper. It had pucker power for sure.

Verdict:  As I mentioned with the palate, Sweet Heat drank much lower than its stated proof. Were I blind tasting this, I'd guess it was somewhere around 110° or so. The nose was intriguing, the palate certainly lived up to its name, but the oak was distracting and difficult to overcome. The finish was nice because I appreciate the qualities of a dry one. While I enjoy oaky Bourbons, I felt this crossed into being over-oaked.  This wasn't flat and one-note by any means, and if you gravitate toward heavily-oaked Bourbons, Sweet Heat satisfies that craving. Cheers!