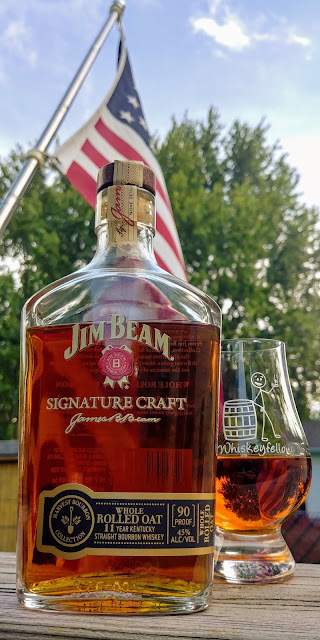 Experimental whiskeys are a blast. This happens when the distillers get funky and tinker around with wild ideas. Some of them are pretty darned amazing. I've also had some that have been dull and boring and you wonder what was going through his or her mind. Nonetheless, they're an adventure.
Enter Jim Beam into the foray. It came out with the Harvest Bourbon Collection. These bottles have been around a while, the project is, as far as I can tell, discontinued, but bottles are still out there on store shelves. Sometimes, they're even on clearance (which is how I purchased mine). According to Beam, it is:

a series of hand-crafted Bourbons that celebrate the distinctive tastes imparted by the distillation of different grains. More than ten years of aging has brought out the nuances of each of these unique ingredients.

Today I'm reviewing the Whole Rolled Oat entry of the collection. It is a straight Bourbon. While the exact mashbill isn't disclosed, it consists of at least 51% corn, and the remainder whole rolled oats and malted barley. If we extrapolate a few things, the standard Beam mashbill is 75% corn, 13% rye, and 12% malted barley. The other option, used for Basil Hayden and Old Grand-Dad, is 63% corn, 27% rye, and 10% malted barley. As such, I'm going out on a limb and suggesting the rolled oat content is substituted for the rye, then the oat content is between 13% and 27%.
Whole Rolled Oat is aged for 11 years and bottled at 90°. We also know Beam is aged in #4 new, charred oak barrels and there is no reason to suspect this one was any different. Suggested retail is $49.99 for a 375ml bottle. I picked mine up for $19.99.
Was it worth the $20 purchase? You know how this works, it is time to #DrinkCurious and find out.
Appearance: In my Glencairn glass, Whole Rolled Oat appeared as a deep, dark amber. It left a thick rim on the wall, and that led to sticky, thick legs that didn't really do a whole lot except hold their position.
Nose: Fruity aromas hit even before I was done letting it rest. When I brought my glass to my face, coconut and berries started things off. They were joined by toasted oak and stone fruit. Beyond that, maple syrup and vanilla rounded things out. When I inhaled through my mouth, a delicious waft of vanilla sugar cookies raced across my tongue.
Palate: The mouthfeel was soft with a medium body. The first thing I tasted was a blend of toasted oak and toasted coconut. Mid-palate, that typical Jim Beam peanut flavor made an appearance, which married with cocoa and coffee. On the back, it was Nutella and vanilla.
Finish: The Nutella worked its way into the medium-to-long finish and became a vanilla bomb. Once that wore off, toasted oak was left behind.
Bottle, Bar, or Bust: There are a few ways to look at this one. The first is the $19.99 I paid for my bottle, and the other is MSRP of $49.99.
I enjoyed my pour and, in fact, kept pouring as I was writing down my tasting notes. For lack of a better word, it was smooth, it was flavorful, it was delicious. I've had oat Bourbons before, and this one blew them all away.
For an Andrew Jackson ($20.00), this was a steal. Remember, this is a 375ml, so you have to double the price to do a dollars-to-dollars comparison for value. I'd rate this a Bottle all day long. For a Ulysses S Grant ($50.00), this becomes a $100.00 bottle and while tasty, this is absolutely not worth that.
If you can grab this one on clearance, for, say, $30.00 or less, I'd jump on it. You're going to love it. But, I wouldn't go any higher than that. Cheers!
My Simple, Easy-to-Understand Rating System
Posted by Whiskeyfellow at 6:00 AM