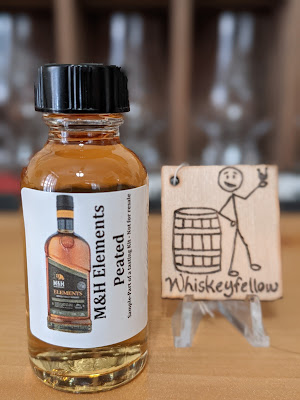 To prove the point that whiskey can be made pretty much anywhere, today's review highlights a peated single malt from M&H Whisky Distillery out of (wait for it) Israel!  That's right - based in Tel Aviv, M&H ages its whiskey at the Dead Sea, which is 1412ft (430.5 meters) below sea level. Aging whiskey in this climate, which sees about 300 days of sunshine a year, means things mature faster while they lose about 25% to the angels.
Established in 2012 as Israel's first distillery, M&H was originally called Milk & Honey Distillery, and they've recently moved to change the name to M&H in an attempt to alleviate confusion and assumptions that either milk or honey are used as ingredients. The Head Distiller is Tomer L. Goren. Using a 9000-liter (about 2377 gallons) Romanian pot still, a 3500-liter (about 924 gallons) German pot still, and lacking any legal requirements to define Israeli whisky, they've chosen to follow a traditional Scottish process for making whiskey. Everything has aged a minimum of three years.
The Peated Single Malt is part of the Elements series.

"The M&H Elements Series is a composition of flavors and aromas assembled from meticulously selected casks that bring forward characters enhanced by the casks' wood, origin, and history. Each expression in this series begins with the M&H CLASSIC Single Malt Whisky and complimented with whisky matured in a variety of hand-picked, superlative and quality oak casks, culminating in a beautiful natural color, impressive flavors, and a well-balanced single malt." - M&H Whisky Distillery

The mash is obviously 100% malted barley. It is non-chill filtered and naturally-colored. As far as cooperage goes, M&H chose ex-Bourbon, ex-Islay, STR (Shaving, Toasting, and Re-charring of wine casks), and virgin oak, and the blend is 41%, 40%, 15%, and 4% respectively. Once matured, it is diluted to 46% ABV (92°), and a 750ml will set you back about $65.00.
Before I start to #DrinkCurious, I'd like to thank M&H for sending me a sample in exchange for a no-strings-attached, honest review.
Appearance:  In my Glencairn glass, Elements Peated presented as honey in color. It created a thinner rim and very sticky, slow legs that crawled back to the pool.
Nose: The peat was evident but not overwhelming. Beneath it, I smelled sweet tobacco, crème brûlée, caramel, crushed grapes, and the slightest suggestion of citrus. When I inhaled the vapor through my mouth, I discovered a definitive briny quality, which I'm assuming comes from the Dead Sea.
Palate:  I found the mouthfeel to be warm and creamy. The first things I tasted were peat and brine, along with oak.  At mid-palate, it was fruity with apple, pear, and lemon. Then, on the back, the flavors of salted caramel and ginger rounded things out.
Finish:  The long-lasting finish consisted of apple, ginger, brine, and smoked oak. When I thought it was finished, citrus made an encore and then faded.
Bottle, Bar, or Bust:  The Elements Peated did an admirable job of reminding me of an Islay Scotch while still offering something a bit different. While not as heavily peated, if you told me that Ardbeg was the distiller, I'd accept it as gospel and wouldn't balk at the price at all. The fact that it isn't Ardbeg makes it even more intriguing and as far as a rating goes, I'm sold!  M&H Elements Peated takes a no-brainer Bottle rating.  Cheers!

My Simple, Easy to Understand Rating System
Posted by Whiskeyfellow at 4:02 PM