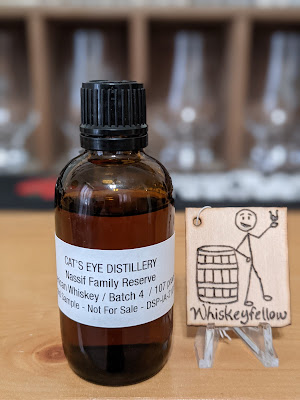 What happens when you try to create something special - a one-off - for a major life event, and it turns out so well you decide to bottle it for everyone? Gene Nassif of Cat's Eye Distillery did that with his Nassif Family Reserve. The backstory on this is that he wanted to blend something for his wedding guests to enjoy during his nuptials. Usually, with cute stories of how a whiskey came about, I smirk because I know better. But, Gene is also not a stranger - I've known him for a few years, and I know he married last year.
Gene sources off-the-radar whiskeys to tinker with. If you've never had a Polish Rye, Cat's Eye has one.  Last year I reviewed an MGP-sourced 13-year Light Whiskey. he seems to be a fan of Light Whiskey from MGP and keeps going to them for more.
With Nassif Family Reserve, he went with a 14-year MGP Light whiskey and blended it 50/50 with a 3-year 10-month MGP Bourye (a blend of 95%/5% Rye and a 60%/36%/4% high-rye Bourbon). That was then diluted to 107°, and a 750ml bottle of this American whiskey runs about $39.99.
I'd like to thank Wisconsin's distributor for Cat's Eye for providing a sample of Nassif Family Reserve in exchange for a no-strings-attached, honest review. For the record, I'm going to #DrinkCurious with Batch 4.
Appearance:  In my Glencairn glass, this whiskey presented as burnt orange in color. It wasn't quite clear, but it also can't be described as cloudy. A thicker rim was produced, and that generated heavy, slow legs to drop back to the pool.
Nose:  While not overly aromatic sitting by itself, once I brought the glass to my mouth, it was effortless to pick out toffee, corn, butterscotch, and floral notes. What I didn't find was anything spicy. As I inhaled the vapor through my lips, the butterscotch continued.
Palate:  A creamy, medium-body mouthfeel led to caramel, almond, and tobacco leaf on the front. At mid-palate, sweet vanilla, honey, and muted peach took over. Then, on the back, clove, rye, and cinnamon.
Finish:  At first, Nassif Family Reserve the finish began as a toffee bomb. That morphed to spice with cinnamon and black pepper. It was cooled by toasted oak, and then very late in the finish, I tasted cherry. There was nothing quick about it.
Bottle, Bar, or Bust:  Nassif Family Reserve is touted as something approachable for beginners yet nuanced enough for more experienced sippers. Overall, I'd have to agree, although I'm left wondering if the 107° is a tad too aggressive for newbies. Regardless, I appreciated the nice balance between sweet and spice. The price offers no real barrier to entry. Do the math and this one winds up snagging a Bottle rating. Cheers!
My Simple, Easy to Understand Rating System
Posted by Whiskeyfellow at 6:00 AM