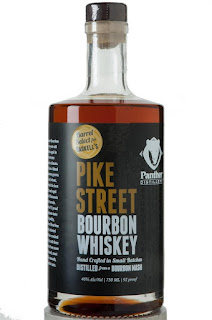 One of the things I really enjoy about traveling (aside from the traveling part) is stumbling upon very local whiskeys. As you know, I'm always in a #DrinkCurious mood, and that means diving deep into the unknown.  On a recent trip to visit family in Minnesota, I stopped in a store I was somewhat familiar with and scouted their local spirits section. As I was perusing the various offerings, a sticker on a bottle caught my eye:  Only Available in Minnesota.  Well, there you have it, that was what I was grabbing!

The bottle said Pike Street on it, and as I looked it over, I saw it was a Wheated Bourbon (meaning, the second major ingredient is wheat). I also noticed it was distilled (not produced) by Panther Distillery. I have heard of Panther before but had never tried anything they've made.
Panther is located in Osakis, Minnesota on Pike Street (hence the name). Founded in 2011 by Adrian Panther, the distillery utilizes three 500-gallon USA-made copper stills. Grains are sourced from an area of 30-miles or less from the distillery. The Master Distiller is Brett Grinager. Panther is Minnesota's oldest operating distillery since Prohibition and was also the first Minnesota distillery to release a whiskey.
Pike Street is aged four years and is diluted to 92°. I did notice the word straight isn't used and am unsure why. A 750ml bottle will set you back about $29.99.  But, it Pike Street a hidden gem? Time to find out!
Appearance:  In my Glencairn glass, Pike Street appeared as a bronzish amber. I found it left a thicker rim that generated fat, fast legs that dropped back to the pool of liquid sunshine.
Nose:  Aromas of toasted oak and corn quickly gave way to candied orange peel and vanilla. When I inhaled through my parted lips, I could swear the flavor of Corn Chex ran across my tongue.
Palate:  There was some warming sensation but no ethanol burn. The body was amazingly light and almost airy.
Wheated Bourbons typically are sweeter than more traditional Bourbons because the distilled wheat lacks flavor, and while it softens the palate (and contributes to that airy mouthfeel), it allows the sweetness of the corn to shine through.  I was, however, unprepared for how candy-sweet this Bourbon was. Vanilla exploded on the front, which was joined by toasted oak. At mid-palate, thick caramel took over, soon to be overtaken by birch wood. And then, on the back... nothing. Try as I might, the back of my palate picked up zilch.
Finish:  A warm, long-lasting finish helped me identify what I experienced. It started with toasted coconut, which led to pecan, then oak, and finally, white pepper.
Bottle, Bar, or Bust:  There are a few things to consider with the rating. The first thing that comes to mind is the price.  Craft whiskey retailing at $30.00 yet not bottled at 80-some-odd proof is very affordable. Stick a four-year age statement on it, and that becomes even more attractive. However, the perceived value only goes so far.
I found Pike Street to be different but sans the sweetness, there was nothing remarkable about it. Don't get me wrong, this isn't a bad Bourbon, it simply didn't shine for me. As such, this one takes a Bar rating. See if you can snag a sample before making the commitment. Cheers!
My Simple, Easy-to-Understand Rating System
Posted by Whiskeyfellow at 6:00 AM