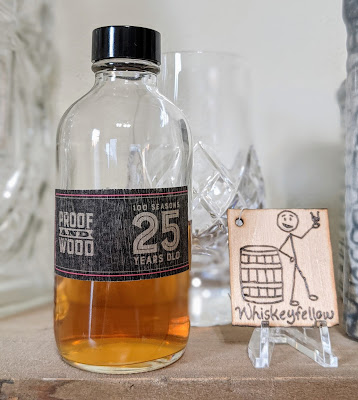 25 years. Some of you aren't even that old yet! If you're talking Scotch, 25 years is starting to get into big deal territory, but their whisky can age much, much longer.  With American whiskeys, 25 years is a curious period of time. While there are some 25-year Bourbons and Ryes, they can be over-oaked and it seems like you're chewing on a barrel stave as you drink it.

25 years. Back in 1995, MGP didn't even exist. At that time, it was Seagrams and known as The Jos. E Seagram Lawrenceburg Plant. MGP didn't come into existence until 2011.

25 years. That's 100 Seasons and is the name of the whiskey I'm reviewing today. Specifically, 100 Seasons is a Light Whiskey that was distilled by Seagram's. Released by Proof and Wood Ventures, 100 Seasons is pretty much a unicorn. There are several 10- to 15-year-old Light Whiskeys out there, almost exclusively coming out of the MGP rickhouse. But, 25 years? I've not stumbled on one yet, until now.

What is Light Whiskey?  Back when Bourbon was on the decline, distilleries were scrambling to figure out what could take its place to stay alive. According to Chuck Cowdery:

"Compared to traditional American whiskeys such as bourbon and rye, the whiskeys of Scotland, Ireland and Canada are generally distilled at a much higher proof, entered into barrels at a higher proof, and the barrels are mostly used, not new as American law requires. This makes them cheaper to produce, which American distillers felt put them at an unfair competitive disadvantage."

Lo and behold, there's Light Whiskey.  Distilled between 160° and 190° and typically aged in used (or, in some cases, new but uncharred) cooperage, it allowed American distillers to compete, at least in theory. Truth be told, it never really took off, and rather than tossing the whiskey down the drain, the barrels just sat around, many times forgotten (for real, unlike the backstory of a certain unnamed whiskey brand).
Dave Schmier of Proof and Wood seized upon this opportunity. Distilled in 1992, it rested for 25 years in the Seagram's/MGP warehouse. It was then transferred to used Rye barrels, where it spent the next eight weeks. From there, it was transferred to steel containers for two years to stop the aging process.
As you can imagine, there wasn't a lot of stock to work with. The yield was only 500 bottles when packaged at 102.3°. Proof & Wood considers 100 Seasons part of its Curated Collection and is presented in a specialty gift box.
How does it taste? The only way to know for sure is to #DrinkCurious. But first, I would like to thank Proof and Wood for sending me a sample in exchange for a no-strings-attached, honest review.
Appearance:  In my Glencairn glass, 100 Seasons presented as a clear, bright amber. It could easily be mistaken for a Bourbon or Rye, and that's not something typical of Light Whiskey. As far as a rim and legs went, this didn't create a rim. It left a bunch of little dots on the wall. Try as I might, I couldn't get a rim produced.
Nose:  When I brought the glass to my face, I was confronted with a blast of sweet, thick caramel. As I continued to explore, I picked up cinnamon, 'Nilla Wafers, and berries. When I inhaled the vapor, a wave of butterscotch rolled over my tongue.
Palate:  The mouthfeel was viscous and full-bodied. On the front, I tasted caramel and cinnamon sugar. As it moved to mid-palate, flavors of sweet fruits took over. Then, on the back, toffee, ginger, and oak commandeered the tasting.
Finish:  Things got long and spicy, and left my tongue with a sizzle. It started with barrel char, then the familiar ginger and oak. All the spice subsided, and when I thought it was over, plum took over and stuck around for a few minutes.
Bottle, Bar, or Bust:  Drinking 100 Seasons is a unique, enjoyable experience, one you're likely not going to be able to duplicate anytime soon. At 102.3° it sips below that without any need to add water. You're probably wondering why I've not disclosed the price, and that's because I wanted to get all of this out of the way beforehand. You'll need to pony up about $350.00 for a bottle.  Before you scoff at that, consider what you're looking at.  It takes a lot for me to give a Bottle rating for something this pricy, but in my opinion, if you can afford it, 100 Seasons deserves it. Cheers!
My Simple, Easy to Understand Rating System
Posted by Whiskeyfellow at 6:00 AM