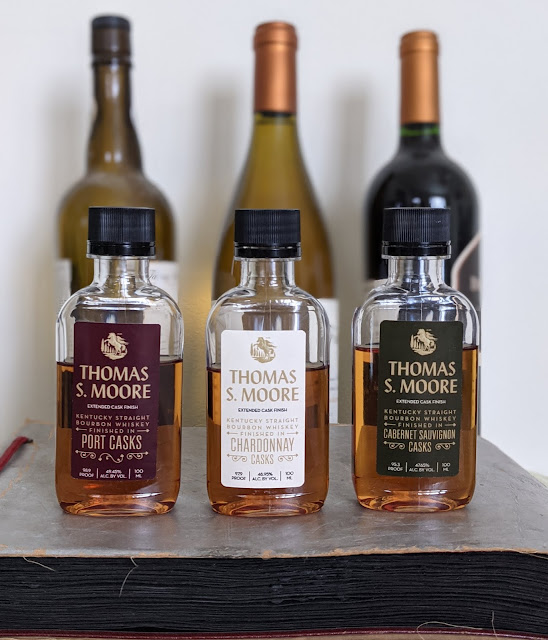 I enjoy barrel-finished whiskeys. There are a bunch of purists who are turned off at the mere idea of finishing whiskeys, and they're absolutely entitled to their opinion. I just don't happen to agree with them.

Barrel-finishing involves taking a properly-aged whiskey and then taking it from its original barrel to a barrel that contained something else. That something else could be anything from whiskey to wine, from coffee to hot sauce, and everything in between. The finishing process can go from a few weeks to a handful of months. Distillers and blenders can be creative, and I appreciate their creativity, even if I don't enjoy the bottled product.

Then there's something called extended barrel-finishing. While there's no legal definition for it (read: marketing speak), the idea is that instead of finishing a whiskey for weeks or months, you're now talking years. That is unusual. Who is the early adopter? None other than Barton 1792, owned by Sazerac (the parent company of Buffalo Trace).

Back in 1889, a gentleman named Thomas S. Moore built and founded the Barton 1792 Distillery. He was an early adopter of Bardstown, which is now known as the Bourbon Capital of the World. The distillery decided to honor Moore with this new product line of extended barrel-finished Bourbons.

"[The] signature high-rye Bourbon is aged for many years in new charred oak barrels before filling other casks that previously matured various wines or spirits from around the world, ranging from Cognac to Cabernet to Port and more. In these fabulous casks, the Bourbon aged another one to three years. This extended cask-finishing method results in elegant whiskeys, each displaying a distinct flavor profile, reflecting nuances of both the Bourbon and the finishing cask." - Barton 1792 Distillery

The mashbill for 1792 High Rye is undisclosed, but if we take the above information from Barton 1792, we know it is aged somewhere between five and seven years. As such, we know it spent six-to-ten years in wood.  You can expect to pay about $69.99 for a 750ml bottle of either the Chardonnay, Cabernet Sauvignon, or Port finishes.

Knowledge is nice, of course, but you can't smell or taste it. The only way to know for sure if it is any good is to #DrinkCurious. I'd like to thank Barton 1792 for providing me samples of these three Thomas S. Moore expressions in exchange for my no-strings-attached, honest reviews. 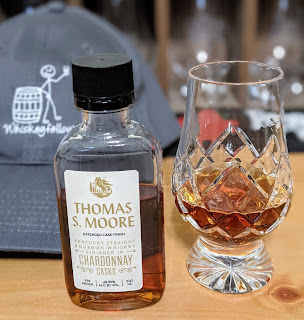 First up, I'm reviewing the Chardonnay Cask Finish. The cask once held California Chardonnay wine, and before it was filled with the Bourbon, the barrel went through toasting to bring out additional flavors. Finally, it is bottled at 97.9°.

Appearance:  In my Glencairn glass, the Bourbon presents as a deep, orange-amber. It created a thick rim and extremely slow legs that crawled back to the pool of liquid sunshine.

Nose:  I found this whiskey to be quite fragrant. It started with buttercream and vanilla, and then it got fruity with apple, pear, and peach. When I inhaled through my mouth, that apple crossed my tongue.

Palate:  The mouthfeel offered a medium body and was oily. On the front, I tasted vanilla and toffee. The middle consisted of baking spices, cinnamon apple, and dried cherry, while the back featured apricot, rye spice, and caramel. The caramel was stronger than I'd imagine. There was a mineral-like quality as well.

Finish:  I found the finish long and buttery, and experienced apricot, caramel, oak, and apple cider. The Kentucky hug was subtle.

Bottle, Bar, or Bust:  Thomas S. Moore Chardonnay Cask Finish was certainly different from other finished whiskeys I've tried. Knowing what 1792 High Rye tasted like made it easy to distinguish the Chardonnay finish. I enjoyed this. I'm not sure if I enjoyed it for $70.00, though. I appreciate the uniqueness of what the distillery has done. I'm offering a Bar rating to it. 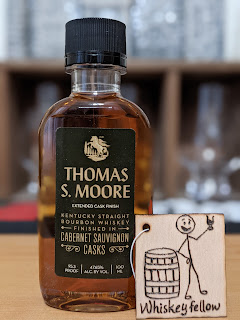 Next up is the Cabernet Sauvignon expression. It shares the same 1792 High Rye mashbill as the Chardonnay, the only real difference is the wine cask used in the finishing process. It weighs in a bit lower at 95.3°.

Appearance:  In my Glencairn glass, the color was a pretty reddish-orange. It left the same thicker rim and slow legs as the Chardonnay finish.

Nose:  The aroma of darker fruits permeated the air. I smelled raspberry and cherry, along with a muted blackberry. Caramel was easy to pick out and provided a mouthwatering invitation. When I breathed in the vapor through my lips, I found strawberry preserves.

Palate:  The Cabernet Sauvignon version offered a luxurious, silky mouthfeel. Flavors of plum and strawberry exploded on my tongue. The middle was French vanilla ice cream and freshly-cracked black pepper. On the back, charred oak and raspberry formed a complementary combination.

Finish:  Slightly shorter than the Chardonnay, the finish was jammy and fruity, with toffee, oak, and black pepper.

Bottle, Bar, or Bust:  While I enjoyed the Chardonnay expression, I just loved the Cabernet Sauvignon version. Sure, it was a fairly simple Bourbon, but it was delicious and made me smile. This one is worth $70.00 and takes my coveted Bottle rating. 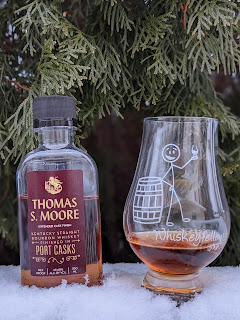 Last up is the Port Cask version. Again, it uses the 1792 High Rye mashbill. Port comes from Portugal and is a fortified wine, meaning it blended with a portion of spirits, which is usually some type of brandy. Fortification is used as a method of preserving the wine from spoilage and was developed to allow the wine to be shipped across long distances. The Port Cask Finish is bottled at 96.9°, making it the highest-proofed of the three.

Appearance:  In my Glencairn glass, Port Cask is the deepest, darkest color yet. The rim was thinner than either the Chardonnay or Cabernet Sauvignon expressions. That rim created sticky drops that didn't really go anywhere, even with some tapping with my finger on the wall.

Nose:  Oak was dominant, and right behind it were both blackberry, raisin, and blueberry. Strange as it may sound, the nose had a syrupy quality to it. I also smelled vanilla. When I drew the air in my mouth, I tasted sweet vanilla and cherry.

Palate:  Sweet, spicy, and airy would be an appropriate way to describe the mouth on this Bourbon. The front was sweet with boysenberry, blueberry, strawberry, and raisin. Caramel and vanilla made up the middle, and then the back featured nutmeg, allspice, oak, and slight pepper.

Finish:  This was the short-to-medium finish was big on cherry and plum with an ending of toasted oak.

Bottle, Bar, or Bust:  The Port Cask Finish had a good balance. I've had several whiskeys that have been finished in Port Casks and the fruit is a common denominator. I would have preferred a longer finish, but this is another that sat well with me and earned a Bottle rating.

Final Thoughts:  The Chardonnay was my least favorite. It wasn't a bad Bourbon, but it didn't have a wow factor that caused me to want to lay down $70.00 for it. But, the Cabernet Sauvignon and Port Cask versions did. Of the two, I preferred the Cabernet Sauvignon with the Port Cask a very close second. I'm curious what future expressions will contain, and am admittedly excited about the proposed Cognac finish. While Barton 1792 is at it, I'm hoping Armagnac is part of the plan.  Cheers!