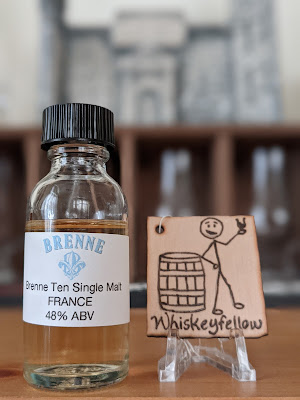 For 2021, I'm trying to explore some out-of-the-way whiskeys. These won't be rare per se, just out of the mainstream. To fulfill that mission, I'm taking us to France. French whisky isn't unheard of, it just doesn't ever seem to get the spotlight treatment.
Founded in 2012 by ballerina (yes, you read that right) Alison Parc, Brenne Whisky touts itself as the first distillery to age its single malt in new Limousin oak and former XO Cognac casks. Let's stick with Cognac for a minute, because that's also where the two types of organic heirloom barley are grown. Using a proprietary yeast going back to 1920, once fermented, it is then distilled in a Charentais Alembic still used for making eau de vie (brandy and in this case, Cognac). Parc's ultimate goal was to highlight the region's terroir.
One of Brenne's limited-edition whiskies is its 10-year expression, aptly named Brenne 10. Only 300 cases a year are made, and it is sold exclusively for the United States market. Parc did indicate that in 2021, France will receive some as well. Dilution is performed with water drawn from the Charente River. A 750ml costs about $110.00 and is proofed to 48% ABV.
Before I get to the #DrinkCurious part, I'd like to thank Brenne for providing a sample of its 10-year single malt in exchange for a no-strings-attached, honest review.
Appearance:  In my Glencairn glass, Brenne 10 could easily pass as the color of straw. It created a medium-thin rim and long, thick legs that dropped back to the pool of liquid sunshine.
Nose:  Aromas of apricot, pear, and vanilla were easy to discern. I also smelled mocha and malt. When I inhaled the vapor through my lips, it was herbal.
Palate:  An oily texture offered a medium mouthfeel. On the front, I tasted brown sugar, peach, and apricot.  At mid palate, the fruit continued with banana and pear, then got interesting with honey and chili powder. The back featured chamomile, oak, milk chocolate, and cherry pie filling.
Finish:  Toasted oak, burnt sugar, and toasted clove lasted as a medium-lengthed finish. Before it all fell off, tobacco leaf rounded things out.
Bottle, Bar, or Bust:  Here's the tough thing about Brenne 10:  I enjoyed it.  It is floral and fruity with just a dash of spice. Drinking Brenne 10 is like diving into a Speyside Scotch and finding one that's somewhat unusual. Saying all of that, for $110.00, I also believe it is expensive for what it is. This one earns a Bar rating, and you'll have to decide for yourself if it is worth the premium.  À votre santé!
My Simple, Easy to Understand Rating System
Posted by Whiskeyfellow at 6:00 AM