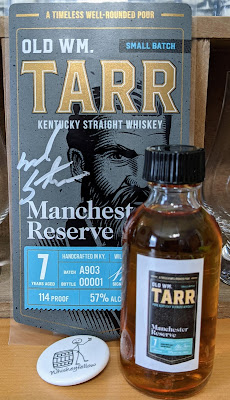 If you think about Kentucky Bourbon, and you wonder who, exactly, was the first federally-licensed distillery to make it in Lexington, you may be surprised to learn it was the Ashland Distillery in 1865.  A mere six years later, a gentleman named William Tarr purchased the controlling stake in the distillery.  Tarr's first venture in distilling was in the Chicken Cock Distillery in Paris, KY.
But, that's only a minor part of the story. Did you know Ashland Distillery was responsible for the creation of the Lexington Fire Department? It came out of a fire that decimated the distillery in 1879. The city fathers determined they needed a permanent fire department. Once rebuilt, the distillery was renamed the Wm. Tarr & Company. As the distillery grew, they made a sweet mash whiskey called Ashland, and a sour mash whiskey called Wm. Tarr (later renamed Old Tarr). In 1897, Tarr had to declare bankruptcy, and his assets were sold to the Stoll family, and in 1902, and the distilling plants they owned formed Stoll & Company, Inc.
Stoll & Company produced brands such as Ashland, Old Tarr, Old Elk, Bond & Lillard, Belle of Nelson, E.L. Miles & Co., and New Hope. Then, in 1908, the Wm. Tarr Distillery was shuttered and dismantled. That was the end of the distillery until the brand was resurrected in 2020 and opened in the famous Lexington Distillery District.

"Our company is committed to the principles and foundations laid over 150 years ago by William Tarr, one of the bourbon giants of the Bluegrass. Today, we stand on the shoulders of his rich legacy. His ideas, philosophy, and daring inspire us. Our mission is to act with Tarr's single-minded determination, guided by our genuine passion for the spirits we create." - Old Wm. Tarr Distillery

Meet the new Old Wm. Tarr Manchester Reserve Kentucky Straight Whiskey. It is a blend of three whiskeys from an undisclosed Kentucky distillery. The first blend, 60% of the recipe, is an 8-year Rye from a mash of 51% rye, 37% corn, and 12% malted barley. The next component, 30%, comes from an 8-year Bourbon made from 75% corn, 13% rye, and 12% malted barley. The remaining 10% is a 7-year Bourbon made from an identical mashbill. The result is a 114° whiskey that retails for around $80.00.
But, is it any good?  I'm here to answer that question, but before I do, I'd like to thank Wm. Tarr Distillery for providing me a sample of Manchester Reserve in exchange for a no-strings-attached, honest review. You know what comes next - it is time to #DrinkCurious!
Appearance:  In my Glencairn glass, Manchester Reserve presents as a classic orange-amber color.  It created a thinner rim, with medium legs that slowly dropped back to the pool.
Nose:  This whiskey was fragrant from across the room while I let it breathe. If there was ever an example of a caramel bomb, this was it. Additionally, a big cherry aroma was evident. That was joined by plum, cinnamon, cedar, and orange peel. If that sounds complex, it was. When I drew the vapor in my mouth, vanilla rolled across my tongue.
Palate:  I was greeted with a creamy mouthfeel with a medium body. On the front of my palate, I tasted caramel, black cherry, and corn. As it transitioned to the middle, I could only pick up brown sugar and nutmeg. On the back, it transformed to oak, leather, cinnamon, and rye spice.
Finish:  Originally I found the finish to be medium, but additional sips convinced me it was much longer. Oak tannins, dry leather, cinnamon, and sugar plum stuck around for a pleasurable experience.
Bottle, Bar, or Bust:  For $80.00 I expect a lot. That's my sticking point with Manchester Reserve. This was a delicious, complex whiskey that offers a lot. There's nothing not to like. The 114° worked well and delivered. It was one of those smooth drinkers that left a good tingle to the hard palate. At MSRP or less, I'd give it a Bottle. But, I wouldn't go above that price. Cheers!
My Simple, Easy to Understand Rating System
Posted by Whiskeyfellow at 6:00 AM