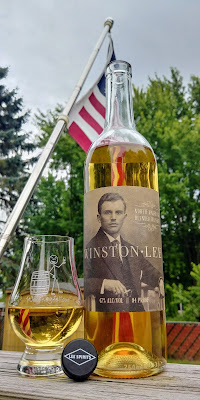 One of the really cool things about the #DrinkCurious lifestyle is that, when you're traveling and you stumble upon something you've never even heard of, you stop and try it. Even if the description is a little weird or off-putting, you try everything before passing judgment. Sometimes, you wind up with a nifty surprise. Other times, you just shake your head and mumble to yourself. But, either way, you keep an open mind.
Today I'm reviewing Winston Lee North American Blended Whiskey.  Yeah I know, you've never heard of it. Neither has most of the whiskey world.  It comes from Lee Spirits Co. in Monument, Colorado, a town almost halfway between Denver and Colorado Springs on I-25. It is run by cousins Ian and Nick Lee. Their philosophy is "Our Prohibition forefathers had an outlaw spirit, and so do we."
Blended whiskey has an undeserved bad reputation. Many people will automatically think neutral grain spirits (NGS) blended with Bourbon, Rye, or another type of whiskey.  However, in many cases, it can simply be different kinds of whiskeys blended together. Even in the sophisticated world of Scotch, blends can be fantastic. In the case of Winston Lee, it made from a blend of four-year Kentucky Straight Bourbon, corn whiskey, and unaged rye whiskey. That's proofed down to 94° using Rocky Mountain spring water. Retail is $14.99 and it is currently available only in Arizona and Colorado.
Is this an opportunity to #RespectTheBottomShelf, or did I throw out $15.00?  The only way to know for sure is to crack it open and taste...
Appearance:  In my Glencairn glass, this blend had the color of yellow straw. It left an ultra-thin rim on the wall and fast, watery legs that dropped back to the pool of liquid sunshine.
Nose:  I am unsure what the blend ratio is, but it is obvious the corn whiskey is a large component. That was evidenced by the aroma of sweet corn. The corn was joined by oak and sawdust. Sawdust generally suggests a younger distillate. Beneath those were vanilla, grass, and lemon zest.  When I inhaled through my lips, it was all vanilla.
Palate:  The mouthfeel was both buttery and oily. There was a distinct lack of ethanol which, considering the corn and unaged rye, threw me for a loop. I prepared myself for a punch that never came. Instead, I was greeted with vanilla cream and sweet corn on the front. Mid-palate, I found mild oak. On the back, the rye spice was a tad sharp.
Finish:  This whiskey is like the Energizer Bunny. It kept going and going and going. The unaged rye blasted through with spice, black pepper, and clove.
Bottle, Bar, or Bust:  Despite having a very uncomplicated palate, I found Winston Lee to be full of flavor. This certainly isn't going to blow your socks off, but it had the potential to be rot-gut and it failed miserably at that. I found it enjoyable, and for $15.00, I believe you will, too.  As such, this one certainly earns both the #RespectTheBottomShelf label and a Bottle rating.  Cheers!
My Simple, Easy-to-Understand Rating System
Posted by Whiskeyfellow at 6:00 AM