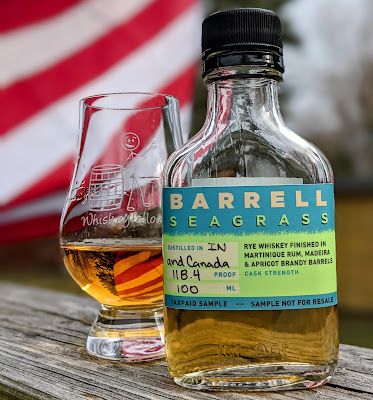 Barrell Seagrass may be the most unique whiskey I've ever tried. There, I said it!  When it becomes challenging for me to figure out just what I'm tasting, that piques my interest. Each time I took a sip, I was tasting something else.
Seagrass begins with a blend of Ryes from MGP of Indiana and an undisclosed Canadian distillery. They've been finished separately in some rather unusual barrels:  Martinique rum, Malmsey Madiera, and of all things, apricot brandy barrels. If you're trying to imagine what this would taste like, don't bother. I spent a week wondering about it. I was wrong.

"Seagrass stands alone as a whiskey, while also inviting the drinker to explore the multitude of influences created by a global approach to sourcing, finishing, and blending. It highlights the grassy oceanside notes we love in rye and the opulence and spice of finishing barrels." -- Joe Beatrice, founder of Barrell Craft Spirits.

If you're unfamiliar with Barrell Craft Spirits, they're blenders. There are good blenders and less-than-good ones. Barrell is in the former grouping. That's not to suggest everything they do is awesome, I've had some blends that have fallen short. But, I've enjoyed most of what I've tried.
Seagrass doesn't carry an age statement, and like everything out of Barrell, it is packaged at barrel proof. In this case, that's 118.4°. You can expect to pay about $89.99, which is about average for a Barrell expression.
Before I get to the tasting notes and recommendation, I'd like to thank Barrell for providing me a sample in exchange for a no-strings-attached, honest review. With that, it is time to investigate this whiskey.
Appearance:  In my Glencairn glass, Seagrass was bright bronze in color. It made a thin rim and perhaps the thickest legs I've seen. They were heavy and crashed back into the pool.
Nose:  Here's where things got really different - dried apricot and plum were sweet notes, then brine offered a barrier of sorts, separating out the grass and mustiness on the other end of the spectrum. When I inhaled through my lips, coconut and apricot rolled across my tongue.
Palate:  The mouthfeel was full-bodied and weighty. The front of my palate found candied apricot, peach, pear, and pineapple. Rich, strong pineapple. The middle consisted of chocolate, almond, and caramel. On the back, there was a mixture of cinnamon, molasses, candied ginger, and the bitterness of walnut.
Finish:  Long and warming, the finish had plenty of wood tannin, salted chocolate, molasses, ginger, rye spice, apricot, and pineapple. Again, these are things that are difficult to imagine intermingling with one another. I did find my hard palate zinged quickly, but the sweetness mellowed out any burn the proof may have otherwise presented.
Bottle, Bar, or Bust:  As I said at the beginning, this is probably the most unusual whiskey I've tried. It was sweet. It was spicy. It was earthy. The challenge became both exciting and a little frustrating. But, as I experienced the frustration, I caught myself smiling because the mystifying quality just worked for whatever reason.
If you're adventurous and want to really #DrinkCurious, I'm here to tell you this is going to stimulate the heck out of you. Of course, I'm in that camp, which means Seagrass grabs my coveted Bottle rating. Cheers!
My Simple, Easy to Understand Rating System
Posted by Whiskeyfellow at 6:00 AM