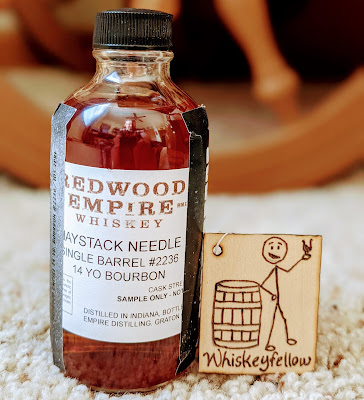 There are some bewitching MGP barrels out there, just waiting to be picked out by "craft" brands looking for something special. When you get into a dozen or more years old, those barrels get somewhat scarce. That becomes more exciting. More tempting than that is when someone is offered an opportunity to purchase one for a private pick.
Out in Cal-I-For-Nigh-Ay, there exists a distillery called Graton Distilling Company with a brand named Redwood Empire. The spirits arm of Purple Wine & Spirits was founded in 2015, and it came up with its own schtick. The brand says for every bottle sold, they'll plant a tree. At the time of my penning this review, it has planted roughly 185,000 trees. That's a lot of bottles sold!
The distillery is housed in a former apple canning and processing facility that was called Redwood Empire and sold apple products under that brand name. Fast-forward to the present, Redwood's product lines are all named after iconic redwood trees in the area. The distillery's private barrel program is called Haystack Needle.
I'm drinking Haystack Needle Barrel #2236.  It is a 14-year Bourbon distilled by MGP.  This particular barrel is distilled from MGP's 75% corn, 21% rye, 4% malted barley recipe. Some Haystack Needle whiskeys are finished in former wine casks, but #2236 was not. It is bottled at barrel proof of 105.2°.
The Secret Midnight Whiskey Club selected this barrel and it is sold at Niemuth's Southside Market in Appleton, Wisconsin. While I have picked for The Secret Midnight Whiskey Club, I was not involved in this pick (and as such, it will be rated on my Bottle, Bar, or Bust scale). Retail is $129.99, and it is lovingly named AngelSpace.

I'd like to thank The Secret Midnight Whiskey Club for providing me a sample of AngelSpace in exchange for a no-strings-attached, honest review. Let's #DrinkCurious and find out what this one is all about.
Appearance:  In my Glencairn glass, AngelSpace appeared as a deep orange. I was a bit surprised that, for its age, it wasn't darker in color. It left a thin rim on the wall, and that rim generated thick, fast legs that fell back to the pool of liquid sunshine.
Nose:  Sometimes as I'm allowing a whiskey to breathe, I can smell it from across the room. This was not one of those instances. Like the color, for a 14-year whiskey, I would have assumed it would be very fragrant. I did find aromas of toasted oak, vanilla, toffee, coconut, and berry. When I inhaled the vapor, caramel rolled across my tongue.
Palate:  The mouthfeel was super-oily and full-bodied. On the front, I tasted toffee, cherry, and vanilla cream. As the liquid inched across my tongue, flavors of caramel, cinnamon, and nutmeg were on the middle, while cherry (again), oak, and tobacco leaf took control of the back.
Finish:  AngelSpace had one of those freight-train finishes. It would not quit. Barrel char, dry oak, cherry, brown sugar, and rye spice all stuck around until the very end and fell off together. The proof wasn't huge, but it did leave my hard palate tingling.
Bottle, Bar, or Bust:  We're talking about an expensive bottle of Bourbon here. I found AngelSpace to be delicious and full of character. I enjoyed the finish enchanting. I'm a bit torn on the price. On one hand, this is a 14-year barrel-proof whiskey. On the other, my standard-bearer of MGP Bourbon is a Backbone Bourbon pick I did with The Secret Midnight Whiskey Club called Unicorn Slayer, which was about half the age and almost half the price, and I felt it was superior.
AngelSpace is wonderful. For the price, I'm going to suggest you give serious thought before making a purchase. If Niemuth's can offer a taste, try it. This one falls under a Bar rating. Cheers!
Niemuth's Southside Market is located at 2121 S. Oneida St. in Appleton, Wisconsin.
My Simple, Easy to Understand Rating System
Posted by Whiskeyfellow at 6:00 AM