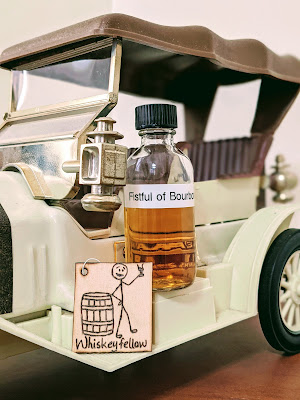 I get excited when a new, affordable whiskey drops. I'm always on the lookout for something to add to the #RespectTheBottomShelf category. So when William Grant & Sons, makers of such famous labels as Glenfiddich, The Balvenie, and Hendrick's decided to dip its toe in the pool of Bourbon, it was limited to the Hudson Whiskey brand out of New York, which is distilled by Tuthilltown Distillery.

To make a more serious dent in the market, Master Blender Kelsey McKechnie brought together five straight Bourbons from around the country. The result is called Fistful of Bourbon. In case you missed it, that's a play on words (a fist is made up of five fingers). The sources of these whiskeys are undisclosed, and while it is, we can at least assume one is Hudson. The others are anyone's guess.

"We wanted to make a Bourbon that was smooth as all hell but with tasty complexity. As a whisky-making family going back over 100 years, we knew the only way to achieve that was by blending. So, we sent our superstar, Kelsey McKechnie to the States on a quest for the perfect blend. She had a great time and almost didn't come home." - William Grant & Sons

Fistful of Bourbon has aged a minimum of two years and is bottled at 90°.  You can expect to pay about $24.00 for a 750ml. I'd like to thank a friend for sending me a sample for a review. And now, it is time to #DrinkCurious.

Appearance: In my Glencairn glass, Fistful of Bourbon presented as light caramel in color. It formed a medium rim on the wall, which led to slow, long legs.

Nose:  The first aroma I smelled was bubble gum. It was joined by cinnamon and cherry. When I took the fumes in my mouth, I tasted corn.

Palate:  The mouthfeel was thick and oily. This got my full attention. On the front, I tasted corn and caramel. The middle featured peanuts, vanilla, and bright fruit. It made me wonder if there was a Jim Beam component. The back was rye spice and oak. There was a touch of anise.

Finish:  Medium in length, the finish was simple with mint and oak. There was also subtle rye spice.

Bottle, Bar, or Bust:  One of the things that makes an inexpensive whiskey qualify for a #RespectTheBottomShelf designation is it must be memorable (and in a good way). The mouthfeel was certainly memorable. But, there wasn't anything else that stood out. In my opinion, this is a very basic whiskey and a good way to get your feet wet in Bourbon if you've not yet. Beyond that, it is too unremarkable to give it consideration as something to keep an eye out for. As such, it earns a Bar rating. Try this one first. Cheers!