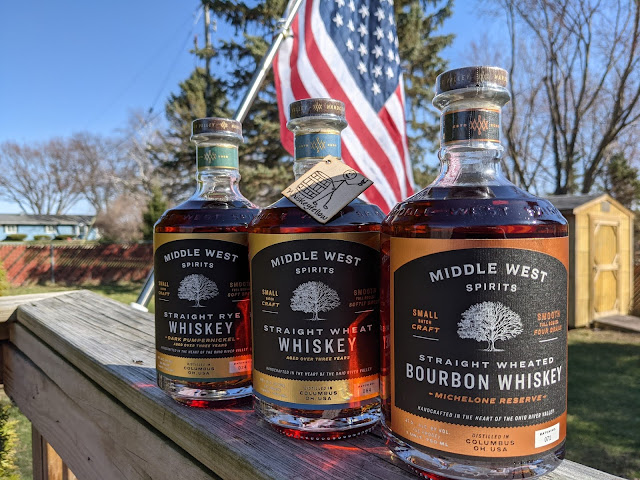 I get excited when I come across whiskey from distilleries that I've never heard of. It means I have a chance to try something new, particularly if it isn't sourced from MGP, Dickel, Heaven Hill, or Sazerac. When it is true craft whiskey, well, that's just an adventure, good or bad. When I was introduced to Middle West Spirits out of Columbus, Ohio, I was, to say the least, intrigued.

Founded in 2008 by Brady Konya, the General Manager, and Ryan Lang, the Head Distiller, their goal was to create whiskey the "right way" - and to offer products that are exceptional. Everything is sourced from Ohio, from the grains to the barrels to the glass bottles.

"Building on four generations of distilling traditions, we added our own deep experience in marketing and manufacturing and focused on elevating the distinctive flavors of the Ohio River Valley. Our artisan spirits honor our roots; and reflect our originality as makers, our integrity as producers, and our passion for the craft of producing spirits from grain to glass." - Middle West Spirits

Today I'll be reviewing three of Middle West's whiskeys:  A four-grain Bourbon, a four-grain Rye, and a 100% Wheat. Before I get started, I'd like to thank Middle West Spirits for providing me samples of each in exchange for no-strings-attached, honest reviews.  Let's #DrinkCurious, shall we? 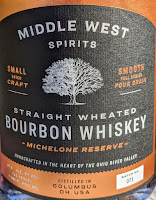 I'm not sure what the reason is for calling this Bourbon wheated when it is a four-grain, except perhaps to suggest the second largest ingredient is wheat. The mash is made from yellow corn, red winter wheat, dark pumpernickel rye, and two-row barley. Named Michelone Reserve for Lang's grandfather, it carries no age statement, but since it is straight we know that means at least two years in oak, and since there's no age statement, that means at least four. Bottled at 95°, it is priced at $46.99. I was provided with Batch 071.
Appearance:  In my Glencairn glass, this Bourbon presented at the color of rust. It created one of the heaviest rims I've seen in an American whiskey, and that led to fast, husky legs that raced down the wall.
Nose:  Sweet and fruity, aromas of caramel, orange blossom, lemon peel, and honey were blended with cinnamon spice. I also picked up something I could only describe as earthy. When I drew the vapor into my mouth, orange peel rolled across my tongue.
Palate:  The first sip was creamy, and subsequent ones only thickened it. The body was somewhere between medium and full.  On the front, I experienced coffee, butterscotch, and cream. The middle was a delightful blend of chocolate and orange peel. On the back, things got spicy with clove, rye, cocoa, and mint.
Finish:  A freight-train finish brought clove, candied orange slices, rye, mint, and oak.
Bottle, Bar, or Bust:  While not overly complicated, there was nothing not to like about Michelone Reserve, and, in fact, I loved it. I appreciated how orange became a theme from the nosing to finish. I was impressed with the transition front-to-back and how naturally it flowed. The finish wouldn't quit and I didn't want it to. Bring on that affordable price tag, and that's a Bottle rating all day long.
✤✤✤✤
Straight Rye Whiskey

This Rye is made from a mash of dark pumpernickel rye, yellow corn, soft winter wheat, and two-row barley. It is aged a minimum of three years, is certified kosher, and bottled at 96°. You can expect to pay $46.99 for a 750ml package. The batch number is 024.  According to Middle West Spirits, this is the nation's first dark rye pumpernickel whiskey.
Appearance:  In my Glencairn glass, this Rye offered a deep, orange-amber. It formed a massive rim and watery legs that crashed back to the pool of liquid sunshine.
Nose:  The aroma was just outstanding. I let Mrs. Whiskeyfellow take a whiff and she rolled her eyes in pleasure. It started with rye bread, then added nutmeg, vanilla, toasted oak, candied fruits, and orange peel. When I inhaled through my open mouth, the pumpernickel became obvious.
Palate:  The mouthfeel was thin and soft. On the front of the palate was chocolate. The middle was oak and the back was a combination of pumpernickel and rye spice.
Finish:  Long and building, what remained was pumpernickel bread, cinnamon, and toasted oak. Once the finish stopped building, it fell off quickly.
Bottle, Bar, or Bust:  I found this Rye to be fairly simple with few notes. I really wanted to love this for two reasons: the nose and the fact this is the first in a niche rye category. However, everything beyond the nose was unremarkable and fairly bland. For $46.99, I want something that makes me smile. This didn't do it, and as such, takes a Bust.
✤✤✤✤
Straight Wheat Whiskey

Wheat whiskeys are unique, and by that, I'm not talking about whiskeys like Bernheim, which is barely legal at 51%. Instead, I mean serious wheat content. That's because distilled wheat has no flavor. Wheat is an ingredient used to highlight the flavors of other grains and offer a "softer" mouthfeel. When there are no other grains, the flavors that come out are strictly from the barrel, and you can expect the profile to be spicy.
The only ingredient in Middle West's Straight Wheat mashbill is red winter wheat. Aged "at least" three years and bottled at 96°, the suggested retail price is $46.99 for a 750ml package. I was provided with batch 084.
Appearance:  In my Glencairn glass, the color was a dark, burnt umber. The rim was medium in weight, and thick, watery legs fell like a curtain.
Nose:  Much sweeter than I expected, the nose featured plum, vanilla wafers, almond, nutmeg, and coconut. When I pulled the fumes into my mouth, I was greeted by soft vanilla.
Palate:  Offering a medium body and creamy texture, the front of my palate picked up dark chocolate and almond paste. The middle started with nutmeg, then cocoa and cinnamon. On the back, I discovered clove, dry oak, and the unmistakable taste of leather.
Finish:  The finish was long, dry, and spicy. Clove and cinnamon competed initially, then dry oak, cocoa powder, and old leather rounded things out. Just before it fell off, I tasted a hint of sweet caramel.
Bottle, Bar, or Bust:  You really run a crapshoot with wheat whiskeys. I've had some that were almost undrinkable. I've had others that were enjoyable. This one falls in that latter category. Like the previous two whiskeys, the palate wasn't overly complicated. It was both easy to drink, gave great flavors, and is priced fairly. I'm conveying my Bottle rating for it. Cheers!
My Simple, Easy to Understand Rating System