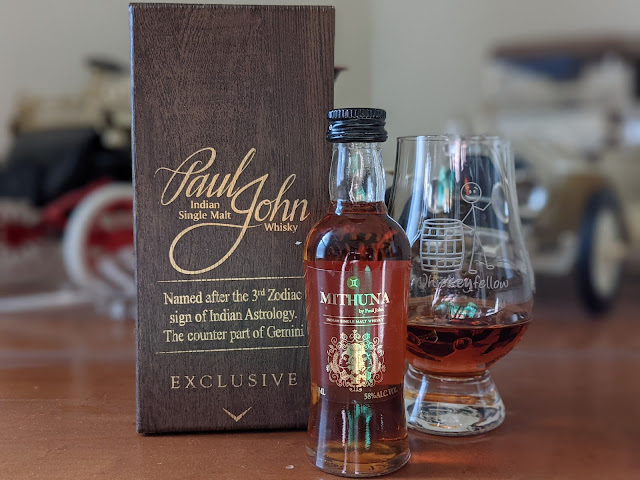 If you blindfolded me, stuck a glass of Paul John Mithuna in my hand, and told me this was aged or finished in Pedro Ximénez sherry casks, I'd wholeheartedly agree with you.
If you told me Jim Murray rated Mithuna his #3 whisky of 2021 without giving me a chance to taste it, I'd shrug my shoulders.
If you told me a five-year-old single malt out of India was $300.00, I'd have said you were insane.
But, Mithuna utilizes not a single stave of former sherry casks. I still don't care what Jim Murray says, and here's a spoiler, I'd pay $300.00 all day long for this whisky.
Mithuna is a limited-edition single malt that is part of Paul John's Zodiac series. This series is centered around double maturation. The first release, Kanya, was named for the Indian counterpart of Virgo. Mithuna is the counterpart of Gemini. It starts with unpeated six-row barley that is high in proteins and low in carbohydrates. It is distilled in a pot still and then aged for five years in virgin American oak barrels. Finally, it was finished for a year in former Bourbon barrels. Naturally-colored, Mithuna is bottled at 58% ABV (116°).  Despite what we know about how long it matured, it carries no age statement.

"Renowned for contradictive strengths, the characteristics of Gemini are epitomized by this Indian single malt as mesmerizing layers of austere, dry tannins are challenged in equal measure by resplendent sugars and mocha on delicate oils." - Paul John

If you've never had Indian whisky, there are a few things you need to know. First and foremost, not all Indian whisky is whisky. Much of it is closer to rum, as it starts with molasses. But, a handful of distilleries, including Paul John, make single malt whisky in a Scottish tradition. The second thing you need to know is that due to the high temperatures and humidity, things in India age much faster than in Scotland or Ireland, usually by a factor of three. The angel's share is also greater, usually around 8% to 10% a year.
I'd like to thank Paul John for a sample of Mithuna in exchange for a no-strings-attached, honest review. Let's #DrinkCurious and find out what this whisky is all about.
Appearance:  In my Glencairn glass, Mithuna presented as a cross between ruby red and deep copper in color. It created a thick rim with fat, wavy legs that plunged back to the pool.
Nose:  Despite the lack of any sherry wood, it certainly smelled like sherry.  Rich plum, raisin, dried cherry, orange, and orange peel were joined by oak and muted mint. When I inhaled the vapor in my mouth, cinnamon, vanilla, and malt danced across my tongue.
Palate:  The mouthfeel was creamy, viscous, and simply luxurious. On the front, the non-sherry sherry notes continued with raisin, burnt sugar, orange, coconut, and honey. At mid-palate, cinnamon, milk chocolate, maple syrup, and pastry flavors took center stage. On the back, I tasted oak, ginger, orange peel, dried strawberry, and a bit of walnut.
Finish:  Lasting just shy of "forever," the finish consisted of thick caramel, milk chocolate, cinnamon raisin, oak, and for a final bow, a blast of rich honey.
Bottle, Bar, or Bust:  I gave this away already, but I'm confident in my Bottle rating. Mrs. Whiskeyfellow gave this a sip and was blown away. Frankly, so was I. I cannot understand how aging something in virgin oak and ex-Bourbon casks equals a nuclear sherry explosion in every aspect of the whisky. If you want a complex nose, Mithuna has it. If you want a crazy-good palate, Mithuna will deliver. If you want an Energizer Bunny finish, Mithuna will satisfy that desire. If you've got $300.00 to invest in a beautiful pour, this should be what you spend it on. Cheers!
My Simple, Easy to Understand Rating System
Posted by Whiskeyfellow at 6:00 AM