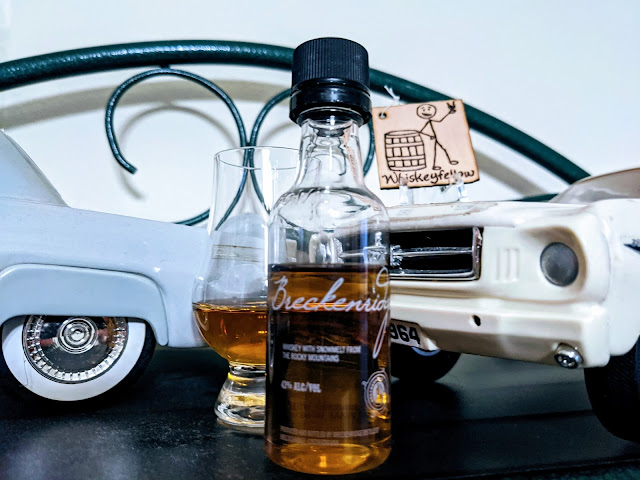 If you can pardon the double entendre, Breckenridge Distillery claims it is the "highest distillery in the world." Founded in 2008, the distillery has made a name for itself with its blended whiskeys.

"Since coming online in 2008 and releasing its first vodka and bourbon three years later, Breckenridge Distillery has quickly become an award-winning producer of fine spirits, being designated one of the top three bourbons in the U.S. How it all came to be, however, stems from a mix of just the right ingredients, a hint of luck and a deep love for quality whiskey." - Breckenridge Distillery

As luck would have it, my review today is of their Bourbon. I will say this much:  If you're going to claim you make one of the top three Bourbons in the U.S, it better be game-changing.  As I'm writing this, I've not yet sampled it, and I don't believe I've had a pour of Breckenridge Bourbon before.

This Bourbon is, depending on how you want to interpret things, either two or three years old. The bottle states it is "a blend of Bourbon whiskeys aged a minimum of two years in new, charred oak barrels." If you go to their website, it says, "Our award-winning Bourbon is aged a minimum of three years in charred, new American oak barrels, blended to reveal the unique qualities of the Bourbon Whiskey." Regardless of the actual age, Breckenridge utilizes 53-gallon barrels.

Breckenridge sources the Kentucky, Tennessee, and Indiana Bourbons and then blends them with its own Colorado distillate. It has a copper pot still on the premises. The mashbill is said to be 56% yellow corn, 38% green rye, and 6% unmalted barley. That last ingredient is interesting, most of the time, at least in Bourbon, the barley is malted. At this point, Breckenridge has my full and undivided attention, because as you know, I'm enchanted by the unusual.

The distillery taps into the city water supply to proof things down. In the case of their Bourbon, it winds up being 86°.  A 750ml bottle will set you back about $39.99, which is in the sweet spot for craft Bourbon. I acquired the 50ml taster at some liquor store during my last trip to Colorado.

Let's find out if this Bourbon holds up to the marketing statement and #DrinkCurious.

Appearance:  In my Glencairn glass, Breckenridge Bourbon appears as the color of honey. It left a thicker rim on the wall that generated fat, very slow droplets to fall back into the pool.

Nose: The aroma of ripe banana was the first thing that hit me. Brown sugar, caramel, and citrus followed, but it was a struggle to pick those out. As I kept sniffing, I pulled out a smidge of mint. When I breathed the vapor into my mouth, it was pure butterscotch.

Palate:  The mouthfeel was thin and warming. Caramel, mint, and honey began the journey on the front. At mid-palate, the caramel faded and became butterscotch. The back consisted of rye spice, malted milk, toasted oak, and corn.

Finish:  Peppermint Starlights (the candy) grabbed my attention. There was a woody quality as well, much like wet oak. I could swear there was the flavor of mushroom in there somewhere. The finish was on the shorter end of the scale, falling off early.

Bottle, Bar, or Bust:  Let's get this out of the way immediately:  Breckenridge Bourbon is not one of the top three Bourbons in the US, and it isn't even close. I'm not suggesting this is a bad whiskey, but this would get lost amongst the plethora of mid-tier Bourbons out there. There was no Wow! factor, it was basic and if I had tasted this in the past, it isn't something that jogged my memory. Fortunately, I don't rate whiskey based upon marketing claims.  I would highly recommend tasting this one at a Bar before making any serious commitment. Cheers!