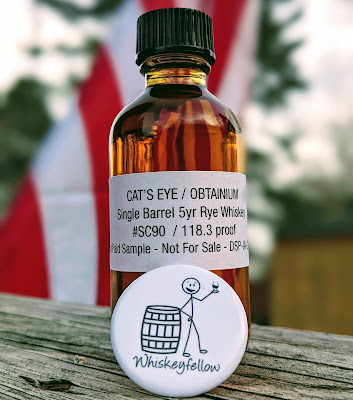 It is difficult to give an introduction to Cat's Eye Distillery because I've reviewed many of its expressions. Cat's Eye buys a lot of whiskeys, often (but not always) from MGP, and packages it under its Obtainium label. Cat's Eye is headed by Gene Nassif, and in full disclosure, he's a friend. However, that won't change the outcome of this or any review.
Single barrel whiskey is cool because once that barrel is gone, it won't be repeated. If you took two barrels, coopered them the same day from the same stack of staves, charred them the exact same amount of time, filled them with the same newmake, and put them adjacent to one another in the same rickhouse for the same amount of time, they'll be different. That's just the nature of whiskey in the barrel.
Today I'm drinking its 5-year single barrel Rye, specifically Barrel SC90. This weighs in at a hefty 118.3° and is distilled by MGP.  This whiskey runs about $50.00 for a 750ml bottle.
I obtained my sample of this Rye from Cat's Eye's Wisconsin distributor and would like to thank them for it in exchange for a no-strings-attached, honest review. Time to #DrinkCurious and find out what this one's all about.
Appearance:  In my Glencairn glass, this Rye presented as deep, orange amber in color. It generated an ultra-thin rim which, in turn, formed medium-thick, slow legs.
Nose:  The aroma of dill was obvious. It was joined by mint, cinnamon, and rye spice. When I drew the fumes in my mouth, caramel rolled across my tongue.
Palate:  An oily mouthfeel with a medium body started things off. On the front of my palate, I tasted rye bread, vanilla wafers, and nutmeg. The middle featured mint and very light, dried cherry. On the back, flavors of dill, rye spice, cinnamon, and oak gave an unusual experience.
Finish:  Medium in length, the finish consisted of smoked oak, cinnamon spice, rye bread, and then an explosion of dill pickle muted everything else.
Bottle, Bar, or Bust:  This Rye drinks much lower than its stated proof. If I had no idea what it was, I'd guess about 100°. If you're looking for heat, you'll want to go elsewhere. I like dill. I'm a pickle freak. However, it dominated both the back of the palate and even more on the finish, and while I understand some folks like a pickleback, that's not my thing. If that's your jam, you're going to love this whiskey, but I found it distracting. I'm conferring a Bar rating for this. Cheers!
My Simple, Easy to Understand Rating System
Posted by Whiskeyfellow at 6:00 AM