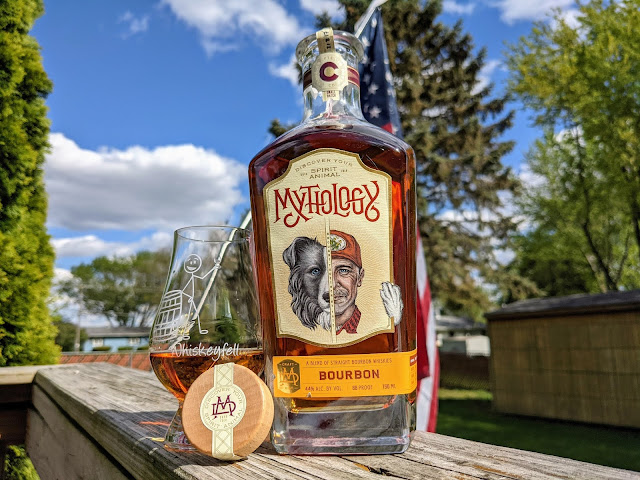 Colorado has experienced explosive growth in the distilling world. The state, home to Coors, used to be all about beer and wine, but the last few years have been all about whiskey.  Head on out to Denver, and you have a decent number of distillers to choose from.

One such option is Mythology Distillery, which was founded in 2018. Its president, Scott Yeates, enjoys discovering a new Colorado spirit whenever he can. To me, that means he's got an open mind and willing to explore different things beyond me-too bottlings.

"Founded by three Colorado natives that seek out experiences through travel and adventure, we love to share and hear stories from others. Our philosophy is that we each form our own Mythology through travel, connecting with others, and our experiences. It’s based on this that we named the distillery Mythology." - Mythology Distillery

Mythology's Head Distiller is Chris Ritenour, formerly of Blaum Bros. out of Galena, Illinios. Mike Blaum told me Chris is a hell of a distiller and was with them for five years before venturing out West.

Currently, Mythology's distribution is limited to Colorado, Wyoming, Montana, and Idaho. You can also buy it directly from their website.

Before I get to the #DrinkCurious part, I'd like to thank Mythology Distillery for providing me a sample in exchange for a no-strings-attached, honest review.

Appearance:  In my Glencairn glass, Best Friend Bourbon showed a deep copper color. The rim was thicker than I expected, which generated medium, slow legs to fall back into the pool.

Nose:  Aromas of sweet corn, brown sugar, vanilla, toasted coconut, and oak permeated my nostrils. When I inhaled through my lips, I tasted vanilla and a touch of mint.

Palate:  I discovered a rich, creamy mouthfeel that was on the weightless side. The whiskey just hovered in my mouth. On the front, I tasted dark chocolate and caramel. Mid-palate offered cocoa, tobacco leaf, and corn. Then, on the back, a nice blend of coconut, cinnamon, and oak meshed well.

Finish:  Initially, I thought the finish was way too short with little to pick up and I was disappointed. But, subsequent sips elongated it, with flavors of vanilla, almond, cinnamon, and dark chocolate. In the end, I'd describe it as medium in length.

Bottle, Bar, or Bust:  The average craft Bourbon or Rye runs between $40.00 and $60.00 with a sweet spot at $50.00. Best Friend Bourbon retails for just under that sweet spot. There is a 15-year component to it, and that's certainly worth a premium, but we also don't know how much of that is the makeup of this blend of straight Bourbons.

The mouthfeel was lovely, the nose was inviting, and the palate was tasty. It would be interesting to taste this four- to six-points higher on proof. As it stood, I felt nothing as far as intoxication or even a tingle on my hard palate. It made it more than easy to sip on.

In the end, the overall experience is what matters. I enjoyed Best Friend Bourbon. I'd love to see it a couple bucks less expensive, but that's not a make-it-or-break-it thing with me. Mythology did a good job with this blend, I'll crown my Bottle rating for it. Cheers!