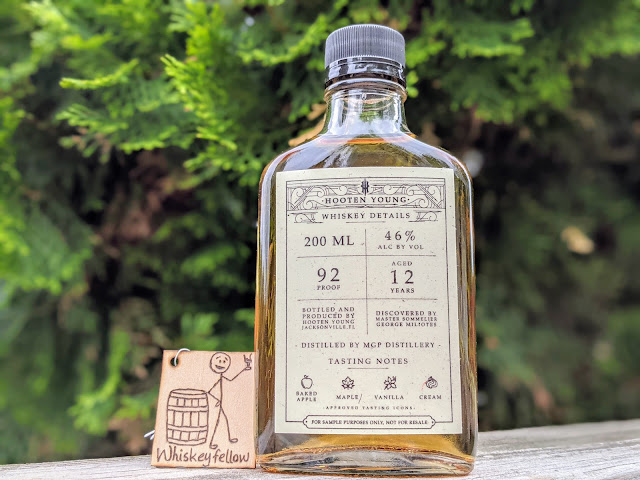 American whiskey... what is it, exactly? The definition is vague and broad. Essentially, it is whiskey distilled in the United States from fermented cereal grains. It could include bourbon, rye, Tennessee whisky, corn whiskey, moonshine, single malt, light whiskey, or the blending of some or all those listed.

When I come across an American whiskey that I'm unfamiliar with, I assume it is not bourbon, rye, or Tennessee whisky. Those incarnations tend to brag about what they have. Single malt is starting to get that way, too.

As I was presented with an opportunity to review Hooten Young American Whiskey, I had no idea what to expect. What Hooten Young presented seemed straightforward and, to my great pleasure, transparent.

"Hooten Young was founded by former Special Operations Soldier, Master Sgt. Norm Hooten and Tim Young. Created as a brotherhood bonded by the love of freedom, family, and honor, Hooten Young is a tribute to the brave men and women of the armed forces who have gone above and beyond the call of duty." - Hooten Young

If the name Norm "Hoot" Hooten seems strangely familiar, he was portrayed by Eric Baca in the 2001 movie, Black Hawk Down.

Hooten Young is a 12-year whiskey sourced from MGP. It started as a mash of 99% corn and 1% malted barley and distilled at 189° before aged at 140° in second-fill barrels.  If you consider all that, it becomes obvious this is a light whiskey.

The barrels were discovered by Master Sommelier George Miliotes, one of just 268 Master Sommeliers in the world. He educates and curates wines and spirits, and owns Wine Bar George at Orlando's Walt Disney World Resort.

Hooten Young is bottled at 92° and a 750ml package will set you back about $64.99. Distribution is in Florida, Colorado, Louisiana, Texas, and Kansas. As expected, you can order it online from various retailers.

Before I get to the tasting notes and rating, I'd like to take a moment and thank Hooten Young for providing a sample of their whiskey in exchange for a no-strings-attached, honest review. I've reviewed several MGP light whiskeys, some are very tasty, others are a hot mess. Let's see where Hooten Young falls on the scale and #DrinkCurious.

Appearance: Poured neat in my Glencairn glass, Hooten Young was the color of gold straw. It provided a slim rim but yielded a curtain of husky, fat tears that dropped back to the pool.

Nose:  The nose was soft and easy with candied corn and toasted marshmallow. As I drew the vapor into my mouth, I picked out vanilla.

Palate:  The mouthfeel was thin-bodied, and the palate was fairly simple.  On the front, I tasted caramel and brown sugar. Mid-palate featured marshmallow fluff and crisp apple. The back offered roasted corn and cherry cola.

Finish:  Long and warming, Hooten Young was slightly numbing that reminded me of Mr. Pibb. When it fell off, I could swear I had freshly-charred marshmallows on a stick at a campfire in my mouth.

Bottle, Bar, or Bust:  This was not like other Light Whiskeys that I've had, and perhaps that's the influence of the lower proof. I liked the simplicity of the nose and palate. The charred marshmallow at the very end was a treat. I enjoyed what I smelled and tasted. I appreciate that Hooten Young is a dozen years old, and having one of 268 Master Sommeliers "discover" it is a fun backstory. I would have a tough time paying $65.00 for it, especially when there are several similarly-aged (and older) MGP light whiskeys bottled at barrel proof for about the same price out there. I give Hooten Young kudos for providing something lovely, but unless the price comes down, I'm recommending you try this at a Bar first. Cheers!