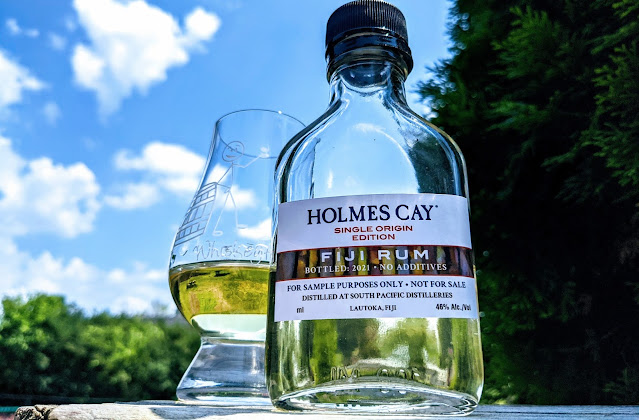 When a brand approaches me and asks if I'd review what they've got, I try to keep a very open mind. As an example, even though I do not enjoy tequila and can barely tolerate it, I've been asked to pen a tequila review. Same with gin. In both cases, I let distillers know upfront that I don't like gin or tequila and they need to prepare for a less-than-flattering review. After all, I advertise they're all honest, no-strings-attached reviews and I stand by that.
I enjoy rum, but I've not studied it, and I've certainly not put in the time and effort as I have with whiskey. I can, regardless, tell you what's good and what's not up to par. But, I couldn't consider myself an authority on it, which is why I'm not Rumfellow.
When Holmes Cay suggested I try its new Single Origin Edition: Fiji Rum, I thought it would be a good challenge and accepted the offer. The sample arrived and I poured it. I took notes. I kept my #DrinkCurious attitude.

The Fiji Rum is blended from "lightly-aged" casks of molasses rums run through both pot and column stills at South Pacific Distilleries of Lautoka, Fiji. In this particular case, Kaye was joined by the minds of Will Hoekenga and John Gulla of the Rumcast podcast. On a side note, I think that's super cool and I would love to do something whiskey-related like that! The rum is just that:  rum. There are no added sugar, coloring, or flavors to adulterate it. What we get to sip is what Holmes Cay calls honest rum.
Packaged at 46% ABV (92°), there were only 2260 bottles produced. It carries no age statement. Distribution is exclusive to the US market, and currently available on shelves in AZ, CA, CO, DC, FL, NY, and OR. It can also be obtained online. It is priced at about $49.99 for a 750ml bottle.
I'd like to thank Holmes Cay for this review opportunity. Let's get to the tasting notes...
Appearance:  Poured neat in my Glencairn glass only because it adds some level of consistency to the review process, Single Origin Fiji Rum appeared as the color of blonde straw. It created a medium ring on the wall that led to thick, oily legs that came down like a curtain.
Nose:  When I sniffed this from the bottle, I was not a happy camper. I smelled plastic and something else "industrial." But, in the glass, that became a minor player and, instead, agave, green pepper, and freshly-cut grass took the spotlight. When I took the vapor into my mouth, I tasted agave and citrus notes.
Palate:  The initial mouthfeel was thin and lacking, but an additional sip lent both weight and substance. It offered a medium body and was coating. Flavors of agave, honey, and vanilla cream formed the front, then the middle had funky flavors that I just couldn't identify. The back was far easier with black pepper, brine, and clove.
Finish:  A locomotive finish started slow and then could not be stopped. It began with black pepper, then clove, followed by resin (not raisin), and brine. It stuck around for many minutes.
Bottle, Bar, or Bust:  As I stated earlier, I know what I like and what I don't, and that's without the technical knowledge of this type of spirit. In the case of Single Origin Fiji Rum, I found it interesting and much different from other rums I've had. Some of that was enjoyable, some of it was strange, but this was very drinkable. I appreciated the higher proof than what is normally acquired from mainstream brands. I respect the purity of Holmes Cay's mission. The price is certainly affordable, especially something that you'd sip rather than you'd liberally pour into a cocktail.  While I'm not adding a rum wing to the whiskey library, this rum earns my Bottle rating. Cheers!
My Simple, Easy to Understand Rating System
Whiskeyfellow encourages you to enjoy your whiskey as you see fit but begs you do so responsibly.
Posted by Whiskeyfellow at 6:00 AM