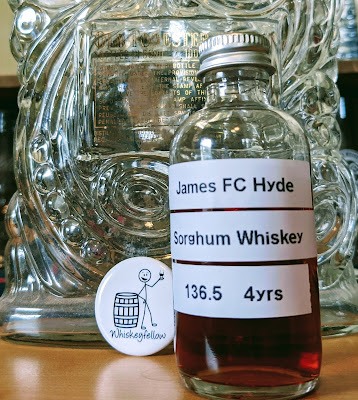 Back in the mid-1800s, James Francis Clark Hyde had a keen interest in botany and discovered he could distill sorghum, a naturally sweet, gluten-free cereal grain. Sorghum was considered an alternative sugar, something that became popular with abolitionists and free-state farmers in pre-Civil War America.
Today, distilling sorghum is still a thing and becoming more popular. There are a handful of distilleries that make it, and one such entity is Jersey Artisan Distillery, headed by Brant Braue, a former electrician, former electrical engineer, and now a Master Distiller.

"Braue has produced an authentic American whiskey of exceptional flavor and character. One that captures the very essence of lush sweet sorghum, both in it's rich taste and in it's 160 years of American heritage. We give you James F.C. Hyde, original Sorgho Whiskey." - Jersey Artisan Distillery

James F.C. Hyde starts with a mash of 100% US-grown sorghum. That's then distilled in a copper pot still and aged four years in 15-gallon charred oak barrels. Stop a moment and think about that - four years is good in 53-gallon barrels, in a 15-gallon, that is the equivalent of a much "older" whiskey.
In most instances, the matured whiskey is proofed down. However, there are some limited, barrel-proof releases, of which this one is.  Weighing in at a hefty 136.5°, you can expect to pay about $69.99 for a 750ml bottle.
I'd like to thank a Wisconsin distributor for providing me a sample of James FC Hyde Sorgo Whiskey in exchange for a no-strings-attached, honest review. Now, it is time to #DrinkCurious and taste what this is all about.
Appearance:  Poured neat in my Glencairn glass, James FC Hyde was the color of deep, dark chestnuts. Just looking at it made my mouth water. It formed the thinnest of rims and the legs were runny.
Nose:  Sweet and enticing, aromas of toasted oak, molasses, and vanilla sugar cookies caught my attention.
Palate:  The Sorgho Whiskey was thick and had a full-bodied mouthfeel. It was also hot. When I say hot I'm telling you I was sweating like I swallowed habanero peppers. That's never happened and gave Mrs. Whiskeyfellow some amusement.  I admittedly had difficulty trying to pull out flavors but tasted molasses and vanilla on the front, citrus and white pepper on the middle, and an earthy quality muddled with caramel.
Finish: Medium-to-long in duration and building the entire way, black pepper, clove, and dry oak stuck in my mouth and throat before vanishing into thin air.
After five minutes I was still sweating and a tad concerned. I had to grab some cheese to alleviate the spiciness that stuck to my tongue. But, to be totally fair, I went ahead and added two drops of distilled water to see how that would change things up.
Nose:  Thick and luscious caramel wafted from my glass, along with molasses and fennel. When I inhaled through my mouth, it, too, was fennel.
Palate: I found the mouthfeel to be thick and creamy. Gingerbread and dry oak started things off, followed by Carroway seed, citrus, and fig. The back was mild anise and cinnamon spice.
Finish: This was like chomping on a bag of black licorice. The anise was big and bold. Hiding beneath were cinnamon, black pepper, and fig. The finish was far longer than when this was poured neat and didn't have that jump-off-the-cliff ending. Instead, it just gently faded.
Bottle, Bar, or Bust:  I have my own issues with anise. I don't like it, I've never liked it, and while I can handle it as a subtle note, when it becomes dominating I'm totally turned off. But, that's not the whiskey's fault, that's mine. I personally wouldn't give this one a Bottle rating because I didn't enjoy it, but plenty of you folks who love anise probably will. As such, this one ranks a Bar. Cheers!
My Simple, Easy to Understand Rating System
Whiskeyfellow encourages you to enjoy your whiskey as you see fit but begs you do so responsibly.
Posted by Whiskeyfellow at 6:00 AM