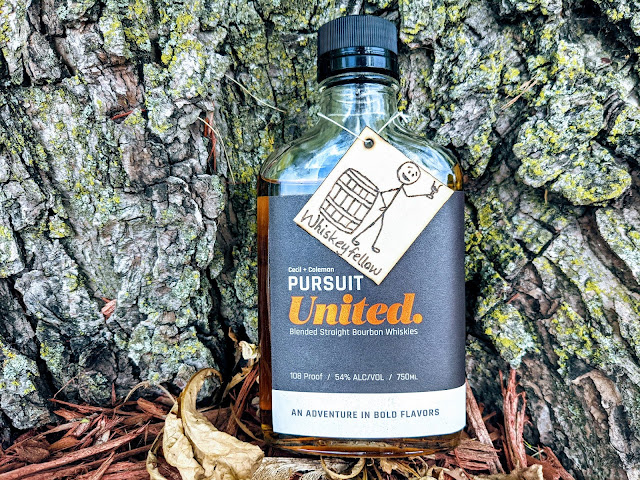 It is always cool to see someone start off in one direction and move to another, and when it happens, it seems natural. Have you ever heard of Bourbon Pursuit? It is a long-running whiskey podcast run by Ryan Cecil and Kenny Coleman.  They're still podcasting, but they've recently started offering their own whiskey brand called Pursuit Spirits.

Pursuit Spirits produces a blend of four-to-five year straight Bourbons called Pursuit United. Sourcing from Bardstown Bourbon Company, Finger Lakes Distilling, and an undisclosed Tennessee distillery (they promise it is not Dickel), this is the second incarnation of the label, the first being this past January.

"We took the lessons we learned from the first release and figured out how to do it at scale. Each of our partner distilleries brings a unique component that makes the blend stand out." - Ryan Cecil

One interesting thing is that Pursuit Spirits bills itself as "[Focused] on transparency and access to unique whiskeys."  However, they keep that Tennessee distillery undisclosed. I'm not knocking them for it, but it seems to defy that mission statement. And, to be absolutely fair, it may be a requirement from the Tennessee distillery, not a decision from Pursuit Spirits.

Non-chill filtered and packaged at 108°, Pursuit United is a blend of 40 barrels that yielded 9342 bottles with a suggested price of $65.00. The mashbills are:

Pursuit United is available online at Seelbachs.com and on the shelves of stores located in Colorado, Georgia, Illinois, Kentucky, Tennessee, and Texas.

I'd like to thank Pursuit Spirits for providing me a sample of their Bourbon in exchange for a no-strings-attached, honest review. And now, it is time to #DrinkCurious.

Appearance:  Served neat in my Glencairn glass, Pursuit United featured a husky rim with heavy, wavy legs that crashed back to the pool of liquid sunshine. The color appeared as rusty brown.

Nose:  Sweet and spicy, aromas of honey, brown sugar, berry fruit, nutmeg, and cinnamon tickled my olfactory sense. When I inhaled the vapor into my mouth, thick molasses and vanilla rolled across my tongue.

Palate:  The mouthfeel was oily and quite warming. Molasses, caramel, and chocolate were on the front, and as it moved to the middle, they transformed to orange, cinnamon, and rye.  The back was a simple blend of seasoned oak and black pepper.

Finish:  There was a perpetual finish consisting of (predominately) orange peel, followed by chocolate, seasoned oak, and black pepper.

Bottle, Bar, or Bust:  Overall, this whiskey drank above its stated proof and left my hard palate sizzling. But, the blend was masterful and everything seemed to come together naturally. I enjoyed the strong orange peel finish, which was the last thing I'd expect to stand out among the other flavors. I'd be curious to taste future releases from this team and am impressed with what I drank today. Pursuit United snags a Bottle rating from me. Cheers!