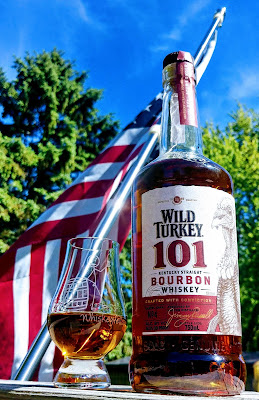 I'm often amazed, with all the whiskeys that I've had checked into my library, what has never been in the catalog. When you get into what I'd classify as The Basics, that should be a part of pretty much any whiskey bar.  Evan Williams. Buffalo Trace. Jim Beam. Four Roses. Maker's Mark... you know, the basics.
Except, I left one out. One iconic American Bourbon distillery - Wild Turkey.
It isn't as though I've not had Wild Turkey products grace my shelf. I have Russell's Reserve. Four different barrels that I've picked, as a matter-of-fact.  And, if you've read any of those reviews, you'll know that until two years ago, I pretty much avoided Wild Turkey.  It has nothing to do with Eddie or Jimmy, they're great guys. But, I didn't care for it.
And then I got into an Austin Nichols Wild Turkey. It was at some American Legion Post and it was hiding behind a bunch of other stuff. It obviously hadn't been poured in a long time. I tried it, and it was simply amazing. I remember asking the bartender if they had any bottles left, and he confirmed that the bottle was just sitting there and they had no more.
Well, flash forward two years and I'm invited to do my first Russell's Reserve pick. Then a second. Then the third. And, I'm loving it. Then I start telling myself that I need to explore other Wild Turkey expressions. I went to a bar and tried Kentucky Spirit. I enjoyed it. I told myself I'll have to grab a bottle of 101. Months passed. COVID hit. And, then my little town, which had been lacking a liquor store for a few years, had a brand new liquor store open up.
I went there on opening day to introduce myself and support them. Because of COVID, they had not received much as far as stock goes. I checked out their whiskey selection, and there it was:  Wild Turkey 101.
If you're unfamiliar with 101, it is named after its proof, 101°. The Russells start with a mash of 75% corn, 13% rye, and 12% malted barley. It is distilled to an entry proof of 114 °, then is then poured into #4 charred white oak barrels where it is allowed to rest between six and eight years. Retail is about $23.99.
So, how does Wild Turkey 101 taste? The only way to find out is to #DrinkCurious!
Appearance:  Poured neat in my Glencairn glass, Wild Turkey 101 presents as caramel in color. It offered a thin rim that created fat, wavy legs to drop back to the pool.
Nose:  This one starts as thick caramel and joined by mint. As I continued to explore, I found toasted oak and cinnamon. And, finally, sweet butterscotch. When I inhaled through my lips, stewed peaches glazed my tongue.
Palate:  Wild Turkey 101 has a medium-thick mouthfeel. Drinking this is like eating cinnamon-dusted vanilla custard. As you continue to dip your spoon in the custard, there are raisins down there. Then, you hit some crust - gingerbread crust. At the very bottom was a puddle of maple syrup.
Finish:  Once I got past the sweet, things became spicy. It began with black pepper and dry oak. Then some of the sweetness returned with berry, raisin, and creamy caramel. Overall, it was a medium-to-long finish.
Bottle, Bar, or Bust:  One of the really awesome things about the #DrinkCurious lifestyle is that it forces you to keep coming back to things you haven't enjoyed in the past.  Wild Turkey 101 is flavorful, affordable, and for the money, this is one hell of a Bourbon. It is absolutely a Bottle rating and proves yet again why you offer second chances for redemption. Cheers!
My Simple, Easy to Understand Rating System:
Whiskeyfellow encourages you to enjoy your whiskey as you see fit but begs that you do so responsibly.
Posted by Whiskeyfellow at 6:00 AM