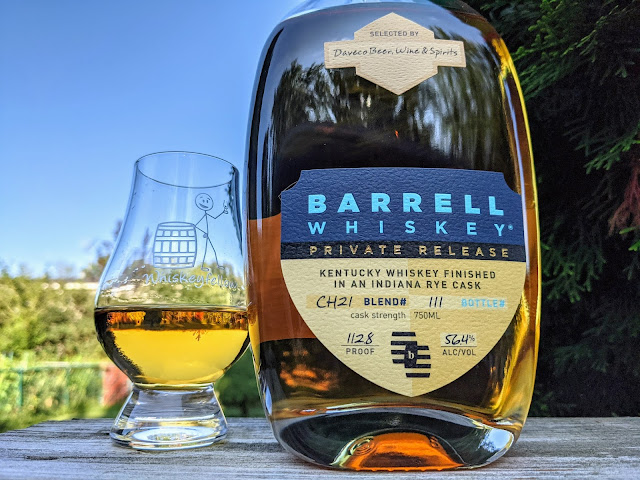 Some months ago, I wrote about the Barrell Private Release program and had a chance to sample several options. They were very different from one another, but this was a much different experience compared to picking a barrel of whiskey.

I've just returned from a trip to Colorado. One of the stops I made was to Daveco, which is in the Guinness Book of World Records as being the largest liquor store in the world! I walked in there and it was just mind-blowingly vast. 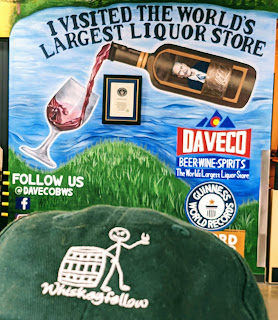 I visit Denver at least once a year. Shortly after the last time I was there, Daveco's manager, Luke, invited me to swing by his store. I remember telling him I was just there, but that I'd be back. That was about a year ago, and when I scheduled my return trip, I was sure to touch base with Luke. For the record, he's an amazingly nice guy and easy to talk to. We chatted a bit while he stocked one of the whiskey aisles.

Luke told me he had a whiskey he picked from Barrell Craft Spirits that he would like me to try (and review). This was Blend CH21.

"CH21 is a blend of Kentucky Whiskeys, the largest component being 18-year-old Kentucky whiskey, finished in an Indiana Rye cask." - Barrell Craft Spirits

What can we take away from that? Well, we know that Barrell sources its Indiana whiskeys from MGP, so that would take care of the finishing cask. We don't know much else, we don't even know what kind of whiskeys were used other than the fact they're all from Kentucky. It could be a blend of Bourbon, Rye, Light Whiskey, Single Malt, new cooperage, old, whatever. It might involve two whiskeys, it could be twenty. And, you know what? It matters not. What matters is what the end product tastes like. It is packaged at 112.8°. For the unofficial record, I've been told by more than one person this is from Jim Beam.

CH21 is available exclusively from Daveco (you can get the direct link here) for $99.99.  Before you order one for yourself, allow me to #DrinkCurious and tell you all about it. And, before I do that, I want to thank Luke for providing me a sample in exchange for a no-strings-attached, honest review.

Appearance: Served neat in my Glencairn glass, CH21 presents as bright gold. It created a medium rim that released very slow droplets that eventually found their way back to the pool.

Nose:  Caramel was the first scent to hit my nose. That was followed by cinnamon powder, plum, cherry, and orange blossom. When I drew the vapor into my mouth, a duo of raw honey and cherry rolled across my tongue.

Palate:  Oily and medium-bodied, CH21 starts with vanilla and cinnamon on the front. That cinnamon builds and carries through the entire experience, including the finish. The middle featured orange peel and butterscotch, while the back brought in rye spice and charred oak. One thing I did notice was the longer I allowed CH21 to oxidize, the stronger and longer the butterscotch notes came through.

Finish:   The charred oak and rye spice didn't let up. It was joined by butterscotch, clove, and black pepper. It was long in length and then it just slammed on the brakes. There was a Wait... What? moment for me the first and second sips. But, then I got used to it. My hard palate did experience a slight tingle, but nothing that I'd describe as numbing.

Bottle, Bar, or Bust:  Luke warned me that CH21 was polarizing, and I guess I can understand why. Not knowing what kind of whiskeys are used in the blend can be a frowning point for some. For me, that's just a blind tasting in a real-world setting. I didn't taste anything in terms of malted barley, so it is safe to assume a Single Malt is not a component (or if it is a minute one). I also didn't sense anything remotely close to a Wheat whiskey used - nothing about this was soft. Beyond that, the composition is anyone's guess. As previously stated, the only thing that really matters, in the end, is how it tasted and I must say that I enjoyed the hell out of CH21. This snags a Bottle rating for me, and if you tend to agree with my palate, you're going to find it fascinating, too. Cheers!