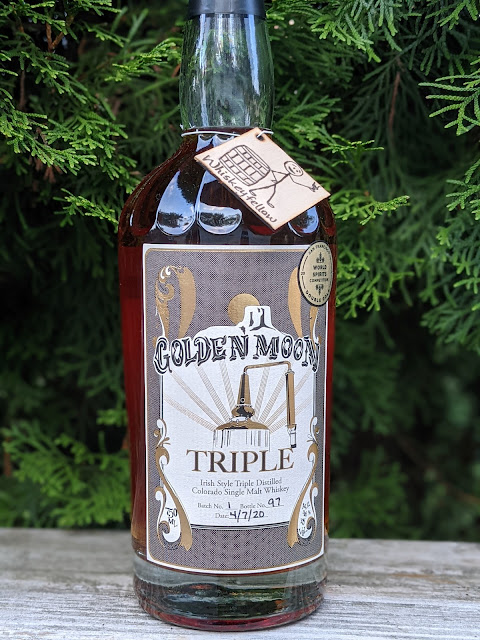 That begs a big question:  Whose single malt is worth drinking?  That's not such an easy one to answer. I've tried several, some are excellent, others are mediocre at best (and some of those big names fall under that latter description).


About a week ago, I visited the Golden Moon Distillery in Golden, Colorado. Golden Moon is a small, artisan operation. Founded in 2008 by Stephen Gould and Dr. Karen Knight, you're not going to find massive stills or a lot of fancy equipment - unless you call reclaimed equipment found at salvage yards fancy. This isn't junk by any means. Stephen has done an amazing job restoring and retrofitting equipment.  Old equipment.  Equipment used by distillers from, pardon the pun, many moons ago. And, that's how he likes to do things.

"The heart of Golden Moon Distillery is Mr. Gould’s world-class research library containing hundreds of rare books on distillation and related products and processes, some dating back to the 1500s. Most of the collection dates from the late 1700s to the early 1900s, though there are a few titles that are much older, or newer." - Golden Moon Distillery

Stephen uses a variety of cooperages from various countries and sizes, and he loves to experiment. He also sources ingredients from local farms, including two-row Moravian barley grown in Colorado and surrounding states, packaging, etc. And, in turn, he provides his solid waste to local farmers and gardeners to use for feed and compost. 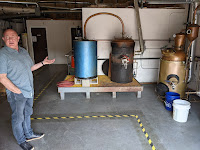 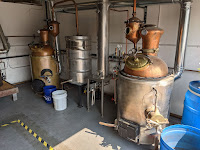 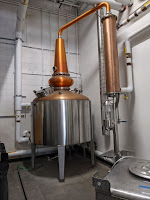 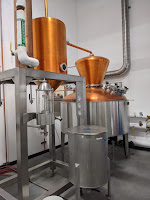 A side-note on the barley:  This was brought to the United States specifically for Coors Brewing way back in 1947. That barley is then married with a proprietary yeast strain.
Golden Moon has received many awards in its relatively short existence, including being named ADI's Distillery of the Year in 2019, and taking Double Gold for a single malt this year.
There are two lines of whiskeys.  Anything under the Gunfighter brand is sourced and always packaged at 100°. All in-house distilled whiskey goes under the Golden Moon brand and is always bottled at 92°.
Today I'm reviewing Golden Moon Triple. Since that's under the Golden Moon brand, this is all their own product from mashing to bottling and everything in between.  One of the things that make Golden Moon Triple different is instead of being made in a traditional Scottish method, Stephen does it in a traditional Irish one.
As described above, it starts with locally-grown malted barley. It is fermented for between 5.5 to seven days, which is longer than the average distillery utilizes. That's mostly due to the proprietary yeast strain. Irish tradition dictates the mash is run through the pot still three times before being aged in #3 charred American oak casks... for a minimum of four months.
Now, I know what you're thinking. Four months? How can anything aged only four months be decent, let alone good? Wait. It gets better. There were a total of 500 750ml bottles made of Batch 1, of which I tasted, and each retails for about $59.99.
Stop. Don't dismiss this yet. Yes, $59.99 for a four-month bottle of whiskey sounds absolutely insane on the surface. Keep reading.  Remember how I said one of his single malts took Double Gold this year at the San Francisco World Spirits competition? Golden Moon Triple was that single malt.
Before I get to the part where I #DrinkCurious, I'd like to thank Stephen for his hospitality, time, and providing me a sample of Triple in exchange for a no-strings-attached, honest review.
Appearance: Served neat in my Glencairn glass, Golden Moon Triple was a definitive chestnut color. It created a fat rim with thick, watery legs that fell back into the pool of liquid sunshine.

Nose:  Absolutely malt-forward, the other aromas consisted of apple and pear. When I drew the vapor into my mouth, honey and apple caressed my tongue.

Palate:  The mouthfeel was both oily and warming. Initial flavors of malt and honey led to a fruity middle of apple and pear. The back was nutty with a good punch of milk chocolate.

Bottle, Bar, or Bust:  There aren't a lot of notes, but what's there is delightful and I really didn't want to stop at one pour. So, I didn't. The result was the same, I sipped it slowly and relished it. Golden Moon Triple is correctly proofed and there's really not a darned thing to complain about. When you look back at the four-month age statement, it seems low but it works well. That leaves us with that $59.99 price tag - I'd pay it. If you tasted this blind there would be no way in the world you'd suspect its young age, and I'm willing to bet you'd smile from ear to ear. Golden Moon Triple snags a Bottle rating from me. Cheers!