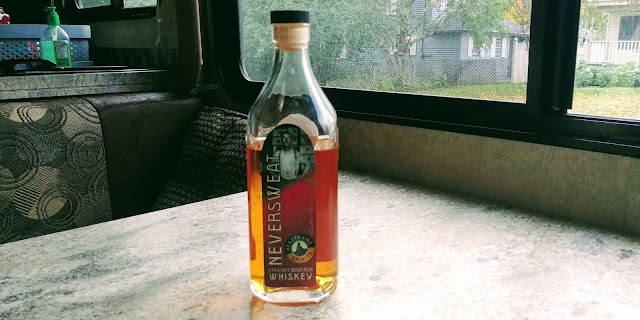 When I travel, I love to find new things.  Usually, that involves hitting up a local bar or a liquor store and asking lots of questions. But, every so often, a friend offers me a pour of something from their liquor cabinet.  In this case, not only a friend but one of Mrs. Whiskeyfellow's cousins.

While we were traveling in Minnesota, what she pulled out of her cabinet was from a trip she took to Montana. Now, I got excited because Montana is one of those states where I've never sampled its whiskey.  Coming out of Butte (pronounced like the first half of beauty, not butt), this straight Bourbon is called Neversweat, and is distilled by Headframe Spirits. So, yes, we're talking not sourced elsewhere. 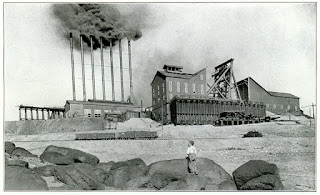 Neversweat is named for a Butte silver and copper mine. It never made it big in silver, but the copper was plentiful and profitable.

Headframe Spirits was founded in 2010 and is a Certified B Corporation since 2017.  That's actually good to know considering the photo above of the mine. If you're unaware, a B-Corp is certified as such when it meets verified social and environmental performance, public transparency (I love transparency!), and legal accountability balancing both profit and purpose.  Headframe is owned by John and Courtney McKee, John is the founder, CTO, and distiller. Courtney is CEO.

Neversweat is distilled from a mash of 70% corn, 15% rye, and 15% wheat. What's missing from that mix? Barley! Headframe utilizes American-made column stills. The Bourbon carries a two-year age statement and is bottled at 80°. A 750ml bottle will set you back only $24.99, making it a very affordable choice, especially compared to much other craft Bourbons on the market.

But, how does Neversweat taste? The only way to tell for sure is to #DrinkCurious - so let's go!

Appearance:  Poured neat in my Glencairn glass, Neversweat presented as gold in color and left a very thick, sticky rim on the wall. The legs were heavy.

Nose:  As I cycled through the various nosing zones, I smelled cornbread, cedar, cereal grains (which was a bit surprising since there's no malted barley), and a slight herbal quality.  When I inhaled through my lips, it was all vanilla.

Palate:  The watery mouthfeel offered a medium body. I found Neversweat to be very corn-forward.  The front was joined by rye spice. Come mid-palate, I tasted coconut and apple. Then, on the back, a mix of vanilla sugar cookie and oak.

Finish: A medium-short finish of white pepper and toasted oak were the only things I could pick up.

Bottle, Bar, or Bust:  I'm not sure if Neversweat is a bit under-proofed or just missing something. It isn't a bad Bourbon. It is an easy sipper. But I found the finish too short and bland. The price is attractive, which is nice but is only one part of the larger equation. As such, I'm going to give this one a Bar rating - try it before you commit.  Cheers!